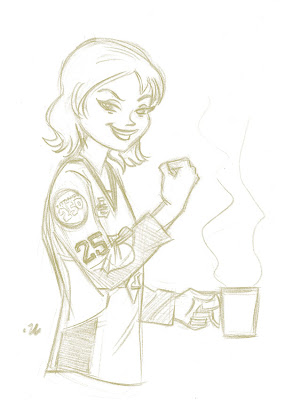 Having a ton of work to do, I decided I'd listen to last night's Game Five in my studio on the radio via NHL.com. That's how I'd been following the games all year, and while I wasn't counting the Penguins out, the possibility that this would be their last game until October made me want to make sure I listened to Mike Lange call one last contest before the long summer break. When the Pens scored twice early to take a 2-0 lead, I briefly considered moving to the couch to watch on TV...but superstition says stay with what's working, so I remained at my desk. As the lead evaporated and the Wings took the lead, my emotions began to take over, and unable to concentrate on what I was doing anyway, I flipped on the TV to witness what I hoped would be an amazing comeback, but feared would be the bitter end. My anger and disgust grew as the seconds ticked off...the Red Wing fans were chanting "WE WANT THE CUP!"...at one point, with about a minute remaining, I tried to think of what in the house might be flammable enough to burn the Stanley Cup patch I bought (with the intention of attaching to my Evgeni Malkin jersey) to unrecognizable cinders.

Then, the amazing happened, and Max Talbot whacked the puck past Osgood with 35 seconds left! Overtime. I went back to the radio and kept working while I listened. The Red Wigs seemed to get a ton of chances, but Fleury was amazing, stopping everything that came his way. The Penguins, thanks to a couple of sloppy plays by Detroit forwards, received a couple of 5-on-4 chances, but with the quarterback of their power play, defenseman Sergei Gonchar, in the dressing room after injuring his back earlier in the game, they had trouble even putting a shot on net with the extra man.

Overtime turned into second overtime, then third overtime...Once you're about an overtime-and-a-half in, you know the result is going to be one of the best memories you have of watching a hockey game, or feel like a colossal waste of time you'll forever remember with dread. The radio team kept mentioning how long Game Five had gone on vs. others in Finals history...seventh-longest...sixth-longest...fifth-longest...

About halfway through the third OT, and at about five minutes 'til one a.m., Detroit's Jiri Hudler high-sticked the Pens' Rob Scuderi in the face, drawing blood...a four-minute penalty instead of the usual two. Then, Mike Lange says Sergei Gonchar is coming out on to the ice. I'm astounded. And baffled. "Sarge" had returned?! My spirits were buoyed with hope, and soared 36 seconds later when the Pens' Petr Sykora got open for a pass by Malkin and fired one right past Osgood. "Heeeeeee shoots and scores!" I jumped up from the desk and ran to watch the celebration on TV.

I knew I'd be exhausted today, but I hardly even feel it. I am gonna cherish the experience of this game forever. Probably the best memory I have of watching a Penguins game is the four-overtimer vs. the Caps back in '96...my broke ass didn't have cable, so I stayed at the laundromat/bar where I worked (don't ask) 2 1/2 hours past midnight and closing time to watch Nedved bury one behind Kolzig. I have a new best memory...but it could get so much better.

Tomorrow is Game Six in Pittsburgh...somehow all those old-ass bitches who play for Detroit are gonna have to get their act together to play another game and take another whack at closing out the Pens and lifting the Cup.

Otherwise, it's Game Seven Saturday night. Anything can happen.

We're alive. It's June, and the Pittsburgh Penguins are still playing hockey.

I missed the game. I can't believe I didn't think to check if it was still on at 12.

I incredibly enjoyed reading these last few posts. I didn't get a chance to check the results and I read this first. It was almost (but I'm now pissed I missed it) like watching the game itself.

great account of the game. as a life long michigan resident and red wing fan, i'm obviously disappointed. however, i'm not defeated. these guys are not going to lose three games in a row. they came out flat in the first and quickly got behind.

i'm just really glad that the past three games have been GREAT hockey. i'm glad the pens settled down after the first two and started playing they way we all knew they could.

FYI, detroit has closed out 12 of their past 16 series on the road.

(also, i love your work and placed an order not too long ago!)

Rob-My wife and in-laws are all Pens fans so I've been pulling for them the whole way through. I have the unfortunate luck of my team winning (this year, mostly the Caps) when I can't watch or listen to the game. I was taking care of dinner, kids' bath and bedtimes, etc., and recovering from a cold, so I didn't see *any* of the game until I heard about it the next morning. We have a party to go to tonight so hopefully that will bring luck!

I loved your account of the game. I watched the game when it was on at 8 and by 12:30 I was wearing thin. I thought it was over like you did but that last goal with 35 seconds sent me roaring!

Fleury was amazing too. I can't wait for tonight's game because I know that everyone will be healed up for sure including Gonchar. I wish I could see Staal or Malone do more and I'm sorry but Malkin was a bit disappointing until toward the end when he was hauling himself all over the Red Wings.

Win out and drink from the Cup. I like those odds.

Though the Pens were badly outplayed Tuesday night...doesn't exactly augur well for Games Six and Seven.

I wrote about the Pens in my blog today, and I also referenced the Caps game in '96 (though I could not have told you who scored the winning goal for anything).

What a game!!! GO PENS!! If they hang on and win the cup, this is easily the best Pens game in history (up to this point). I still have fond memories of game 1 vs. Chicago in the 92 final. Down 3-0 and 4-1 they tie it with a little bit of time left and then, with overtime looming, Mario slams one home with like 16 seconds left in the 3rd...the Pens go on to sweep a team that had come in riding an 11-game win streak (the Pens finished with an 11-gamer).

But the Wings will still win it. Time to go. It starts in less than 5 minutes.

Both teams look a bit tired tonight. Guess neither one has fully recovered from that last game.

I was worried the Penguins were going to score with a second left in the game, but Ozzie caught it!

I'm pretty happy right now. What can I say?

Both teams played very well in this series.

That's great and all, but between watching these guys win it again and being disappointed as hell, I'm not really capable of feeling any love right now.

as both a fan of your art and of the red wings, i hope to see a nice drawing. please?

it was a good game, and sure, the wings have won a bit lately, but they do a good job scouting and that is how they've been able to keep a contending team both pre- and post-lockout.

both teams played well, and it was good, solid hockey.

Guess we got our act together, eh?

Sorry for you loss. Better luck next year.

Great resiliency and compelling series to watch. Kind of happy to see the Wings celebrate on visitor' ice and not in front of the "we want a Cup" home fans and in a way glad Pens didnt win this time (the fans can be insufferably obnoxious like the Steelers fans when the team does something for the 1st time in nearly 20 years).

Shame of it is the Pen couldve easily won had they had a major league coach who didnt have his lunch handed to him. And a more consistent goalie -- yes Fleury was incredible in Game #5 from the middle of the game into the OTs, but in Game 3, 4 & 5 he gave up a major soft goal on plays he shouldve been prepared for....win one of those games and the series turns majorly.