Wow. Sorry for the long delay, folks. I was on the road last week, visiting my parents in Ohio with my almost-two-year-old daughter. Since the second round matchups weren't yet set until Tuesday night (the day I left), and 'cause my parents idea of cutting-edge technology is a digital watch (not to mention trying to keep up with the aforementioned daughter without her mom around to help!), I had zero chance to with art or picks for round two! My sincere apologies. I'll come correct next time around, no matter who moves on.

Anyway, we're a few games in already, but here goes:

Boston was hardly tested in their sweep of Montreal, whereas Carolina needed a couple miracles to advance past the Jersey Devils in round one. Will the long layoff lead to a hangover for the Bruins, or will they continue to roll? Sadly, I fear they will. It's been entertaining to see how many of the Boston teams have suffered misfortune, coming close to ultimate victory before enduring bitter defeat, since Prince of Darkness Bill Belichek got nailed for cheating in mid-2007 (the notable exception being last year's Celtics... then again, look what happened to this year's team.) I think a great letdown is in store for the Bruins as well, but not in this round. Sorry, Davis. Bruins in five.

Historically, the Penguins have owned the Capitals in the playoffs. Of seven meetings, Pittsburgh has won six, even after losing the first game of the series in five of those times. I fondly remember the last time, in 2001...the Penguins finished Washington off for good in overtime of game six, and on the Capitals post-game wrap up show on HTS network, the disbelief, frustration and bewilderment of losing again was evident on the faces of the studio staff. There was a lot of silence, head shaking...host Al Koken could hardly find words...it seemed like all they wanted to say was "Fuck. Just...fuck. Really? Again? Fuck. See you next season." It was glorious. When it happens again sometime early next week, I'm gonna DVR it. Penguins in six. 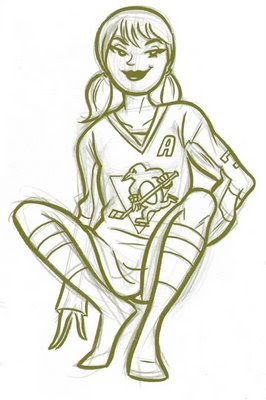 It seems like an odd proposition, but I think the Ducks might actually have a good shot at taking out the Red Wings. They play physical, almost dirty hockey...they're riding high after knocking off the President's Trophy-winning Sharks relatively easily (BTW, I'm gonna set my account up to shoot me an email early next April that says "DON"T PICK THE FUCKING SHARKS!"). C'mon, Anaheim, the playoffs are so much more interesting with Detroit out of it. Prove me wrong and get it done. I'll even draw your shitty non-uniforms in the next round. Red Wangs in six.

In the past few seasons, young teams who've had a ton of success in the regular season (2007 Pengiuns, 2008 Capitals) have had a hard time carrying that success into the playoffs against more experienced teams. The Blackhawks, though, seem to have bucked that trend, defeating a tough Calgary team in a series that was a bit closer than the 4-2 final tally would indicate. And boy, can they score. Things went a bit closer to script for the Canucks, who took out the upstart Blues pretty easily. If the Hawks can get a split in the first two games in Vancouver (update: they did), I think they'll be able to withstand the 'Nucks the rest of the way and advance to the Western Conference finals. Blackhawks in seven. 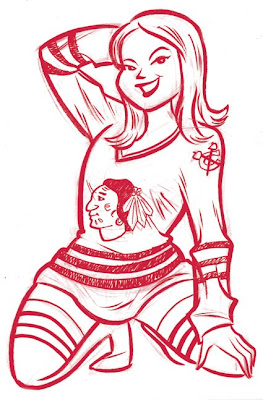 The matchups aren't all quite set, but there's little doubt who I'll be picking in round two in the east, be it Bruins, Caps or Hurricanes! As I'll be on the road for the next few days, I'll post my picks for the semifinal round tomorrow, but the art will have to wait until the weekend (which means no one will care).

About the image: This is actually a portrait of my own lovely wife, created (at least in part) as the answer to her oft-asked question "When are you gonna draw me in a sports jersey?". She also specifically requested that it be a Sidney Crosby #87 Penguins jersey, though she now has no memory of ever having done so. 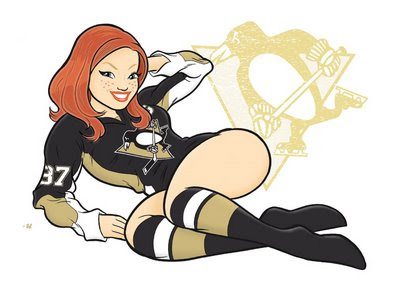 For awhile there, it looked like this pinup I did for a (very patient!) fella who moved to the Bay Area from Minnesota would be a first-round playoff matchup. Alas, it was not to be! 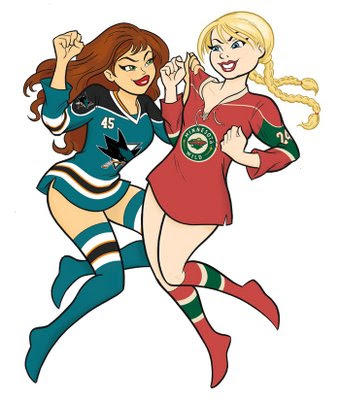 Here's what's gonna happen in the first round of the Western Conference playoffs...thanks to the NHL Network, a couple weeks worth of free Center Ice previews, and teams like the Blackhawks and Blue Jackets being in the mix instead of the boring old Stars, Avs and Oilers, I've actually watched a good amount of Western Conference games this season!

The Sharks enter the playoffs as the best team in the regular season, primed for another long playoff run. Seems like we've heard all this before, only to see San Jose collapse early on. This looks like the year they finally turn it around and make it to the finals. 'Course, I said the same thing last year. And the year before that. Sharks in five. 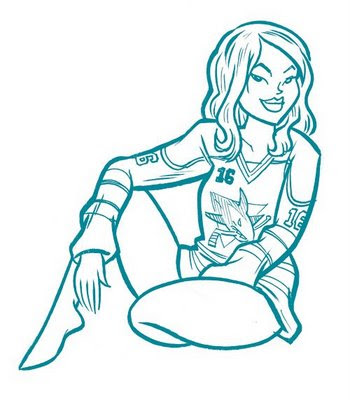 My hatred for the Red Wings has not lessened one bit since they won the Stanley Cup at Mellon Arena last June. If anything, it has increased. They're the one team I can't watch, as they fill my heart with too much hate. The thought of Marian Hossa touching the Stanley Cup makes me vomit in my mouth.

On the other hand, here are the Columbus Blue Jackets. Hailing from my home state of Ohio, I've wanted to love them...but it's been hard to muster much enthusiasm for the Jackets during their first decade, as they've generally been mediocre to terrible. But here they are, in their first playoffs, facing a very familiar foe with whom they faced with pluck and valor all season. Could a first round upset be in the cards? I want to think so, but common sense prevails. I've never made a prediction that I more wanted to be wrong. Red Wings in five. 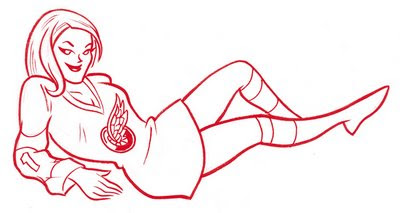 The Blues are a pretty amazing story, having moved from 15th to 6th place in the Western Conference since mid-January. The Canucks lured Mats Sundin out of semi-retirement solely for moments such as this. That said, I'll be surprised if I watch even one period of this series. Canucks in seven, 'cause I feel like I need to pick at least one Canadian team! 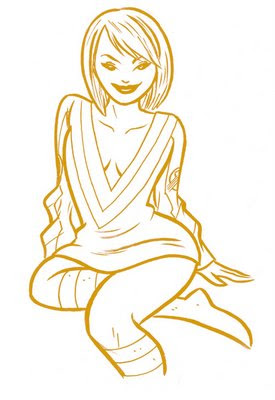 As thrilled as I am to see Chicago back in the postseason, this is the one I've been going back and forth on the most. It seems like the Blackhawks' series to win; the Flames are tanking a bit, and Chicago is surging. Still, there's this nagging feeling that Calgary is going to play up to its potential and steal this one.
One thing's for sure: you couldn't hope for a better looking series, as these teams have two of the sharpest sets of duds in the NHL.Blackhawks in seven. 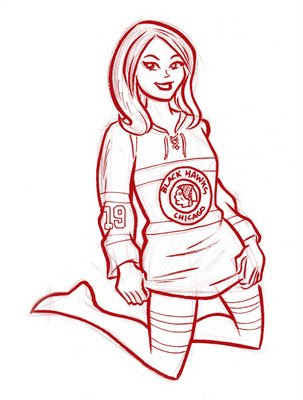 By the way, anyone who'd like to play along in this picking-the-playoffs business (and in the process donate a little scratch to a worthy cause) can fill out a bracket over on the PensBlog's Rinktology site. They're collecting for the Mario Lemieux Foundation and are giving away some super-swell prizes for the top finishers! As Pensblog Charlie would say...Do it.
Posted by Robert Ullman at 8:23 PM 0 comments

It's that time of year again! The Stanley Cup Playoffs begin tomorrow, so here are the official Atom-Bomb Bikini prognostications. I'll cover the Western Conference Wednesday (hopefully before the first puck drops!), and here's the picks for the East!

The Bruins and Habs come into this year's playoffs as mirror images of themselves from last year, with Boston dominating the Eastern Conference most of the year and Montreal scraping at the end to try to stay in the mix. The Bruins made it interesting against the Canadiens in 2008, something this fatigued and banged up Centennial Edition of Les Bleu, Blanc et Rouge will be hard-pressed to emulate. Bruins in five. 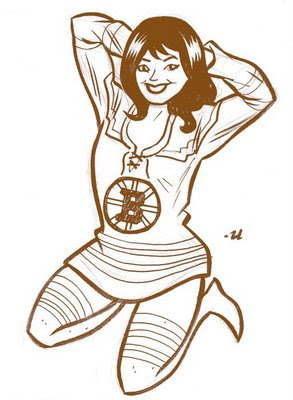 I don't like the Capitals. I don't really much care for Alex Ovechkin. The broadcast team for Washington's games are a couple of grating, virtually unlistenable blowhards. And with the exception of a couple of my really good friends (great fans who realize the team was there before 2006), their fanbase is entirely composed of the kind of douchebags who would spend $190 on a personalized jersey with "Crosby Sucks" on the nameplate. That said, I really hope they can overcome their suspect goaltending, beat the Rangers and give all those Caps fans what they think they want, a second round matchup with Pittsburgh. Any way you look at it, it would be an exciting series...and the idea of beating them in the playoffs again is almost too delicious to contemplate. Capitals in six. 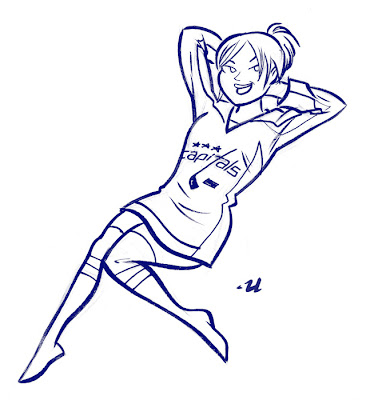 This will be something like the millionth straight trip to the playoffs (actually the 12th) for the Devils. For Carolina, it's the first time back since they won the Stanley Cup in 2005-2006, thanks to a couple late-season flops the past two years. They're familiar playoff foes, having met three previous times in the last ten years. The Devils are always dangerous with Martin Brodeur in goal...dude can steal a series... but the Canes are the hotter team, having won a dozen games in a row at home. I was there two weeks ago for a Saturday night Canes/Pens match, and that building rocks...Canes fans are INTO it. Still can't figure out why they show that video of Ted Danson every time they score, though. Hurricanes in seven. 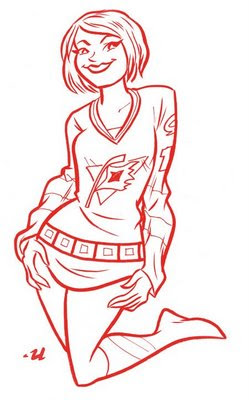 The Flyers gave up a third period lead in the last game of the season and lost, enabling the Penguins to vault ahead of them in the standing and secure the fourth spot in the conference and home-ice advantage. I'm not sure how much it'll matter...I was actually kind of looking forward to the Pens splitting the first two games in Philly before heading home for games 3 and 4. But Pittsburgh has been great at home lately, and there's no reason to think that won't continue against a hated rival who knows they let one get away. Penguins in six. 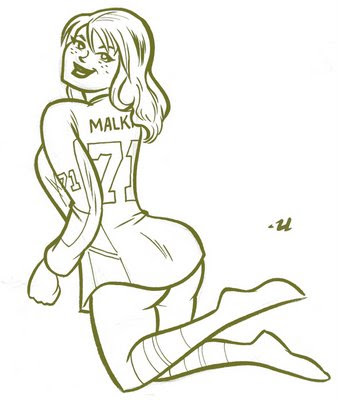 The Theater of the Future!

Holographic picture? Check. Floating recliner and ottoman? Of course. Tentacle arms that feed you your popcorn? Why the hell not? 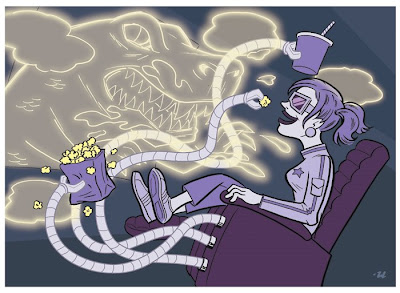 The preview image says it all; read the whole shebang at Richmond Magazine. 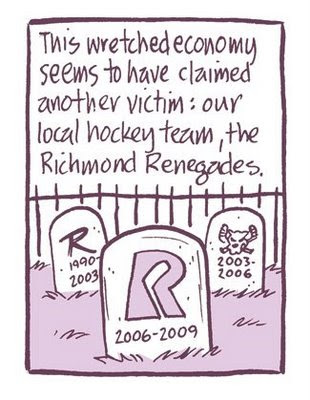 Confederates in the Bleach Aisle

This image was used for the cover of a recent issue of C-Ville Weekly, for a story about big retail encroaching on protected historical areas...in this case, a Civil War battleground. The big blue area at the top was obscured by the title in the printed version, but it looks a little funny here. 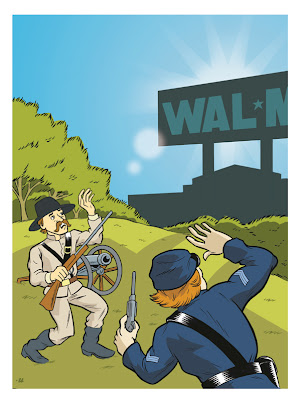