Second verse, same as the first...If you enjoyed Teeny Bikini #1, you'll be happy to know that the new issue of Teeny Bikini is finished and ready to ship. The cost is $3 (two bucks plus a dollar for postage), and you can use the handy Paypal link below to order! Or, if you wanna save on postage and will be in the greater Charlotte, NC area this weekend, you can purchase a copy in person at the big Heroes Convention!

And Mack, your copy is on the way! 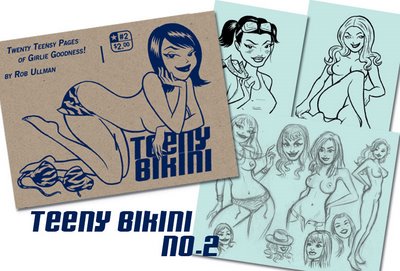 Who Should I Draw?

Heroes Con is next weekend, and, like last year, I'll be donating a drawing to be auctioned off at the show. This year's theme is the Man of Steel, and my question to my readers is, which member of the Superverse should I draw? I've got a poll running over at the Lurid forum, and the choices are:

Please make your voice heard, and let me know which of these you'd like to see...of course, these are just my initial ideas, so if you feel like you've got a better suggestion, please share! I'll probably take opinions for the next couple days or so, and start the drawing on Sunday. And thanks in advance for your input! 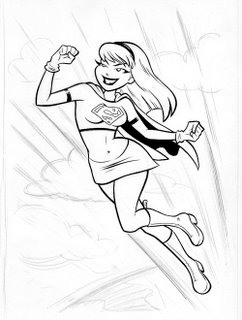 Been pretty busy lately, and as a result, the blog has been getting the short shrift. Here's a few bits to tide you over and keep you up to date.

The pencils to my full-color pin-up in Wide Awake #666, which'll hit stores this Hallowe'en: 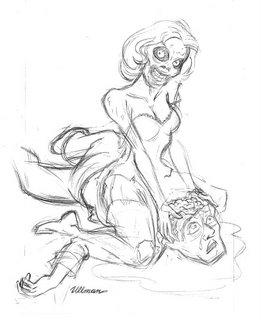 ..and a sketch/layout for the wraparound cover to TEENY BIKINI #2, which'll debut later this month at Heroes Con in Charlotte, NC: 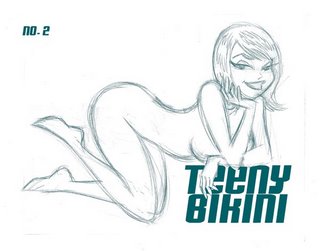 The Steelers collected their Super Bowl rings over the weekend. Too bad they don't offer them to fans as well...can you imagine how rad I would look sporting this kind of bling? 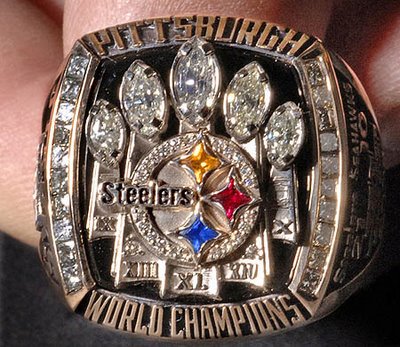 I think they're pretty cool, as ridiculously oversized man-jewelry goes...I like that they worked all five Lombardy Trophies in there.
Posted by Robert Ullman at 6:38 PM 0 comments 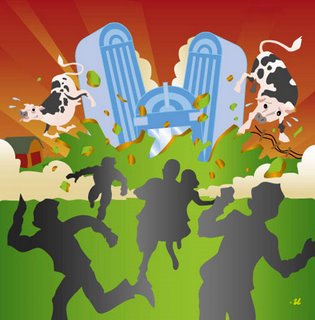 Here's a look at the original version of a recent piece I did for Richmond Magazine...the printed version (in the June issue, on newsstands now) ended up quite a bit different, as a result of fears about it's looking too Nine-Elevenish and my being out of town and unavailable to make changes as it went to press.

It's a little bit of an unusual look for me, all done in Illustrator and traced over my rough pencil sketches. I especially like the cows.
Posted by Robert Ullman at 10:11 AM 2 comments

She's Lucky She So Damned Cute

Yesterday, our new dog Betty decided to take herself on a little adventure. She escaped from the back yard somehow (no doubt by jumping up repeatedly at the side gate until she accidentally unlatched it)...all I know is that when I looked out to check on her, as I do every ten minutes or so when she's outside, she was gone and the gate was open. Immediate panic...I checked all the sides of the house real quick, to no avail...when she gets out, she's gone. So, I jumped on my bike and rode around the neighborhood, jingling her leash so as to get her attention. I must've been out there for an hour, and I didn't see the slightest sight of her. I was beginning to panic...we have busy, four-lane roads on three sides of our neighborhood, and she's just dumb enough to run out into traffic and get herself flattened. In fact, after awhile, I was becoming more and more certain that this indeed had happened, and as I turned every corner I expected to see her lying in the road. Morbid, I know.

I was pissed...our other dog, Puck, knows how good he has it, and feels no compulsion to try to escape every chance he gets...I began to think if she wants out so bad, then just stay the hell out, and spare me the trouble. The problem with Betty is, she's kinda like a wild animal, in that she feels no shame or fear...hse's sweet and loving, but ultimately, she's looking out for number one. Whoever had her before we did must have done almost nothing in the way of training.

Anyway, Puck and I did a wider search in the car, checking out a couple of the surrounding neighborhoods, but after two hours of fruitless searching, I gave up. I figured either she'd find her way home or she wouldn't...and I wanted to be near the phone in case someone found her (her phone number's on her tag).

Then, all of a sudden, there she is, strolling around in the front yard of the house across the street under the giant magnolia tree. I went out on the front porch and barked "Betty!", and she ran to me, then into the house, immediately gulping down an entire bowl of water. She was filthy, covered in...something. It was kinda sticky, but not stinky, maybe mud or god knows what. I dragged her outside and hosed her down, her second bath in less than a week. I while I was still pretty pissed that she'd run away, I have to admit I was happy to see her. Happy enough, anyway, that I didn't throttle her. She's lucky she's so damned cute.

EDIT: Sean, in the comments section, rightly points out that you really can't talk about how cute the dog is without at least showing a few pictures. Noted. So, at the risk of becoming one of "those" bloggers, here's a few pics of Black Betty, uncharacteristically at rest. For a more illustrative glimpse into the True Betty Experience, check out this l'il bit of video, captured by the Sassy Redhead on a girls-only trip to North Carolina back in March. 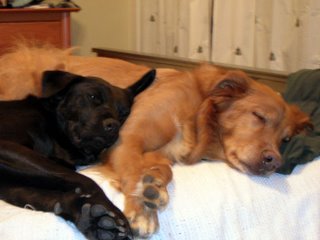 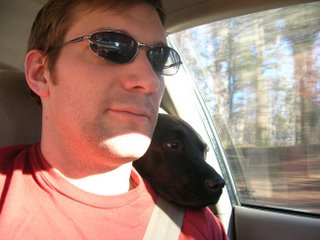 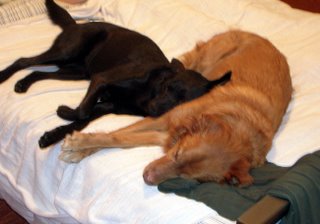 Posted by Robert Ullman at 9:36 AM 2 comments