I meant to post this weeks ago, but I got caught up in all the Heroes Con and San Francisco hoopla and forgot all about it: This year's edition of the fantastic Night of Honky-Tonk Angels benefit show happened on June 1, and I was once again honored to provide the artwork for the poster! 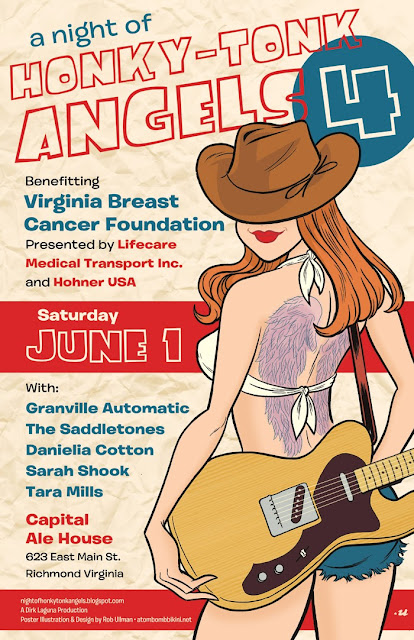 Posted by Robert Ullman at 1:00 AM 0 comments

As you might suspect, my heart isn't super-into this one...after the colossal turd the Pens laid in the ECF, the last thing I was all excited about doing was a Cup Finals illo for another team. Still, a trip to Heroes Con over the weekend salved the wound a good bit, so I managed to get my shit together enough to finish out the postseason here.

If I'm being completely honest, I really would've been scared of a matchup with Chicago had the Pens advanced that far. They've been top dog all season, and they don't seem to play with the mental fragility Pittsburgh does. Boston will no doubt give them a harder fight, and a harder series, but in the end, I think the Blackhawks will solve Tukkaa Rask and score enough goals to win.

And besides, what's the alternative? Don't forget, Bruins owner Jeremy Jacobs is one of the main reasons we had to suffer through the lockout...do you really want to live in a world where such a man gets to lift the Stanley Cup over his head for the second time in three years? Ain't NOBODY got time for that. Blackhawks in six. 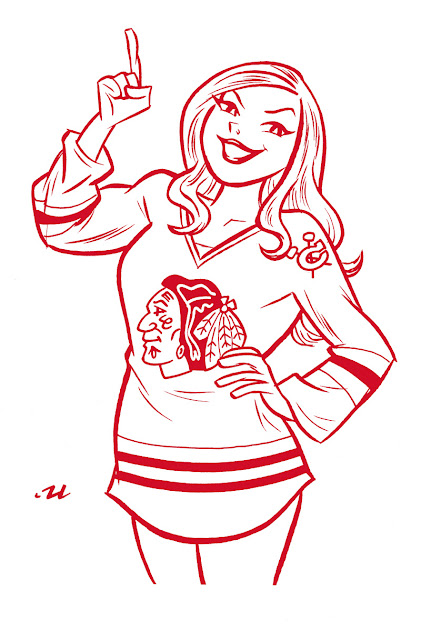 This is as absolutely amazing a final four as you could want. None of this 7th and 8th seed BS, just pretty much the top four teams (standings be damned) over the course of the season, squaring off for the right to go to the finals.

This matchup definitely seems to favor the Pens. After a shaky six games against the Islanders, they steamrolled the Senators, scoring goals in bunches and clicking at a very high rate on the power play. Boston's defense is deeper than Ottawa's, but they also play within a system and are not particularly speedy, which should rule out most of the chaos that Pittsburgh had such trouble with against the Isles.

The Bruins, who I frankly thought looked done and disinterested entering the playoffs, found another gear and dispatched the terrible New York Rangers fairly easily after their dramatic scare against the Leafs in round one, winning in the way that teams who have been there before tend to win. The Penguins are a whole different challenge, however, and the Crosby and Malkin lines figure to produce offense at a level they haven't yet seen.  Factor in the Bruins lousy penalty kill and I just can't imagine a way they manage to best the two-headed monster four times in seven tries. Or even twice. Pens in five.

This is a real battle of titans that, honestly, could go either way. Though both teams' series went the distance in round two, I think the revelation in Chicago was "Maybe the are beatable", whereas the story in Los Angeles was "Man, Jonathan Quick is really, really good!" He's gonna steal a game, and he might steal two or three.

Still, the Blackhawks showed a ton of resiliency in coming back from a 3-1 deficit against Detroit, winning win they had to, and emphatically at times. Their forwards are incredible, and if they can get rolling and score goals... especially on the road... they should be able to move on.

It's seemed all season that this was the matchup we'd see in the Western finals, and it's a series I really can't wait to watch, 'cause it's gonna be good! Kings in seven.