...but at least I'm not a welcher. As per the stipulations of our wager, I wore Jeff Brown's Red Wings jersey last Saturday at Heroes Con. Lucky for me, the convention hall was hotter than hell, and he let me take it off after a scant four hours (allowing me to reveal my Penguins/ Jordan Staal T-shirt underneath). What a pal!

In all honesty, it wasn't too bad, and if the number of people who came up and gave a hard time knowing the situation was irksome, at least it let me know that people are actually reading all this nonsense. And it made me glad I never went through with that "2 Girls, 1 Stanley Cup" idea I had a couple days after the finals ended.

Courtesy of the boys at the Dollar Bin, and used without permission, here's a little bit of photographic evidence. BOO! Red Wings stink! 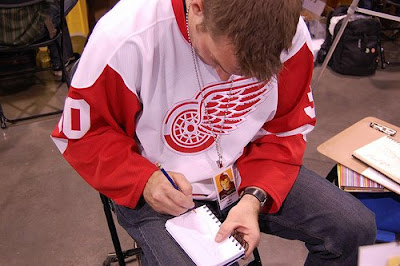 Posted by Robert Ullman at 9:40 PM

I think J Chis gave me a educational comic about using pictures like that for the use of social commentary or something. What was that..? The freedom of information? Public Domain? Oh well its in that brain somewhere. Thanks Chris!

You look good in read and white Rob. (snicker, snicker)

I second what Kris said! The Jersey doesn't look that bad on ya. The red and white look very good on you. Why, I think, in time, you might grow to love the jersey!

Just kidding. Good sports are so much better than bad ones. And just think, next season, you've got a pretty good chance of foisting a Pens jersey on him.

I like your style, and love your pin-up flair. Oh, and thanks for thinking I classed up the joint at the Con; I suppose a halter top in any fabric can translate well. Keep drawing, and give us a wider selection of stickers next year ;).

Way to take one for the team! Pensnation salutes you. I had to wear a Dallas Cowboys hat at a meeting after the Steelers lost SB30, so I can relate.

Would a Gordie Howe jersey at least have taken the sting out of it? You're a man of your word! I salute you.

Angels: That means a lot. Thanks!

Jamie: Pleasure's all mine! And I do have a couple more sticker ideas in the hopper for this fall. Stay tuned!