One of the projects I've been working so feverishly to complete in the last couple weeks is a strip for Richmond Magazine on the state of baseball here in town. Here's a panel...the rest will be available in the September issue, which should hit newsstands in about a week and a half. I'll post the whole thing here once I get the okay from the higher-ups.

To briefly summarize: The stadium here in town, The Diamond, is dilapidated and outdated, even though it's only about twenty years old. It's also kinda located in the middle of nowhere...it's close to my neighborhood, but little else. There's been a debate in Richmond for several years now whether to build a new downtown stadium, or renovate the one we have. Personally, I'm 100% for building a new park, even though there's about a million other things Richmond needs to spend its money on, because I figure if you're going to shell out some buck, might as well go all the way and do it right. Unfortunately, the city seems determined to do it wrong. I also take the local team, the Richmond Braves, (and their owner, the Atlanta Braves) to task on a number of issues, the worst of which is their glaring apathy and seeming disinterest in the situation here in town.

Big thanks to Chad and Jack, my editors at Richmond Magazine...I basically just called them up and said "I'd like to complain like a cranky old man about baseball for a full page, and I'd like you to pay me for it!" and they graciously made it happen. I hope at the very least that this strip inspires some angry letters, which I know they love! 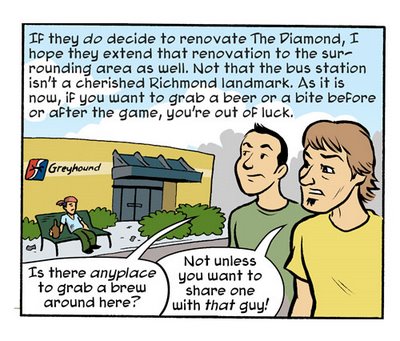 Ever since I got back from Chicago (actually, since about ten days before I left), I've been swamped under a mountain of work. About a half-dozen spot illustrations, a full page illo for Richmond Magazine, another full-page comic strip about the state of baseball in Richmond for that same issue of Richmond magazine, several brochures and postcards, and installing a new kitchen faucet. It doesn't stop there, either...I've got several other big jobs in progress right now, all due by the end of the month. Wow. Almost makkes me wistful for the days last spring when I was complaining about having no work (Just kidding!)!

Anyhow, all this activity really takes it's toll on my ability to concentrate on any one thing for any amount of time...suffocating under an impending deadline, and there I am just sitting and staring at a blank page because I can't block out the head noise long enough to get started! In a way, though, it makes arriving the job's completion that much more satisfying because of all the suffering that went into the process. I guess there's really no point to any of tis other than to wonder if the same thing happens to anyone else out there!

Boy, does this ever read like a Mrs. Chappy post!
Posted by Robert Ullman at 4:17 PM 3 comments

I just can't bring myself to call it Wizard World!

I'll be on the road again this weekend, traveling to the Windy City to set up and sell my wares at Wizard World Chicago. It being a Wizard show, I imagine there'll be an overwhelming superhero vibe going on, but I'm hoping enough indie comix fans show up that it won't be a complete bust. If nothing else, I'll get to hang out with some of my best chums in the world, which is well worth the price of admission in itself. And if I manage to get my paws on a Special Convention Edition JLU Solomon Grundy action figure, then so much the better.

I'll be hanging out with the gracious publisher of OddGod Press, Jesse Bausch, at their table in the Small Press section, which is #647. I'll only be there for two of the three days, definitely Saturday and most likely Sunday. I'll be doing sketches, and I may even hold a raffle for a a piece of artwork or two! So when you're at the con, look for me and my fancy blue tablecloth! 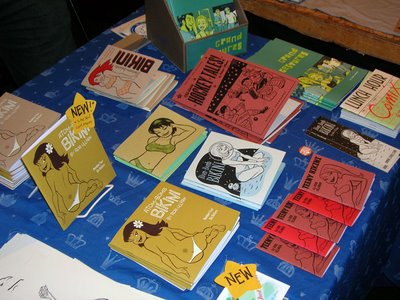