I created this image last week for my old pal Jandos at the Washington City Paper. He believed enough in a young Rob Ullman years ago to assign me a regular gig illustrating spots for Savage Love, a professional courtesy whose importance to my career is impossible to overstate. Working on this silly, sexy story brought back some good memories! 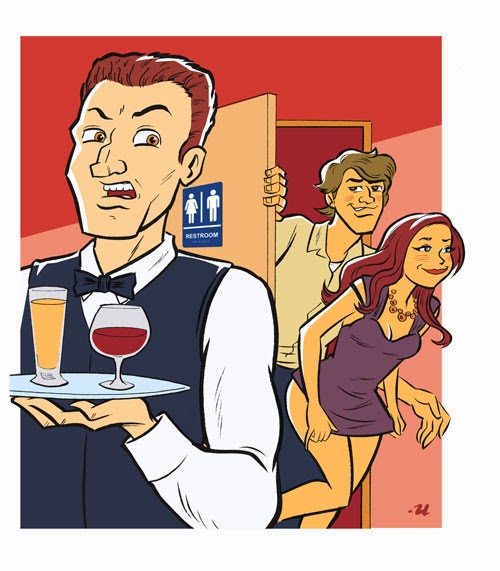 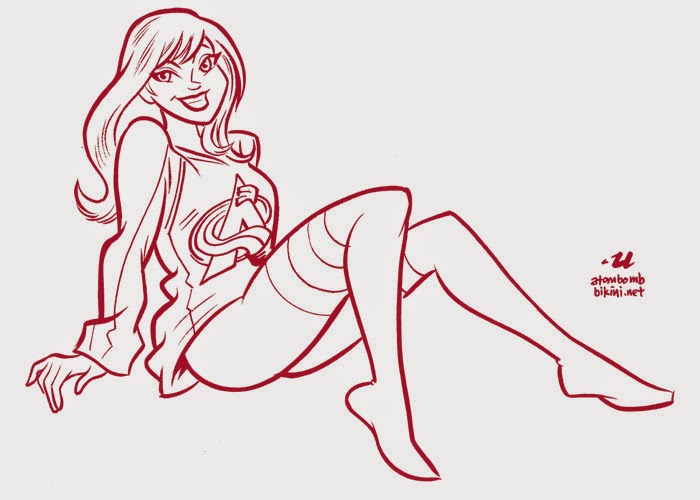 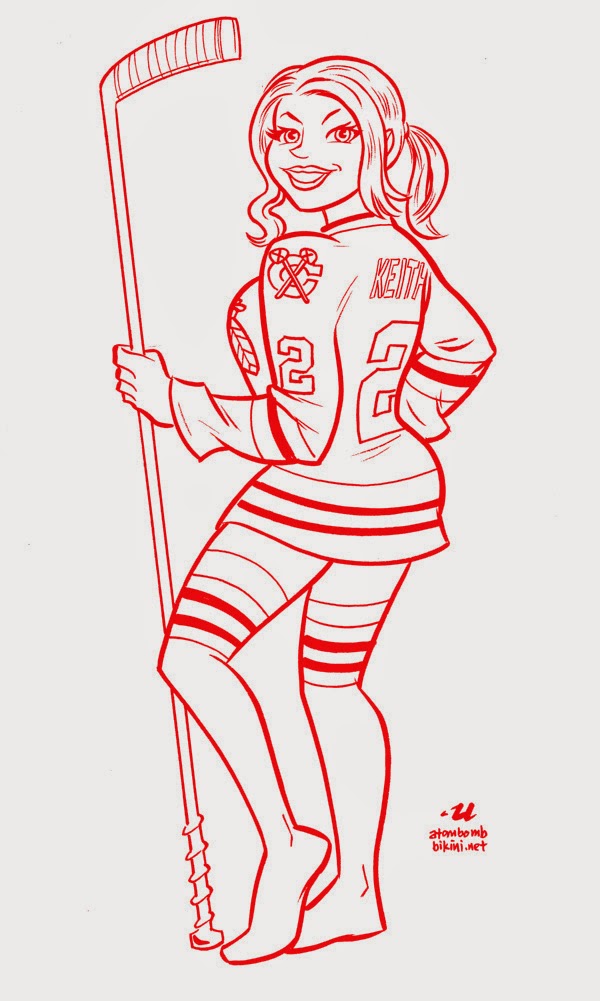 Of course, if you'd like to go the extra mile and get a personalized, one-of-a-kind uni-girl illustration of your very own to your exact specifications, that information can be found here.
Posted by Robert Ullman at 5:13 PM 0 comments 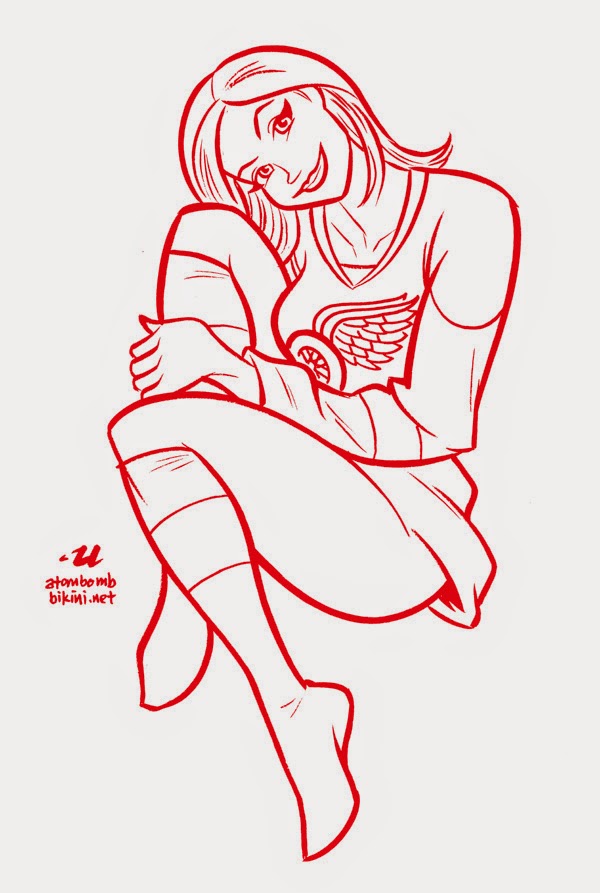 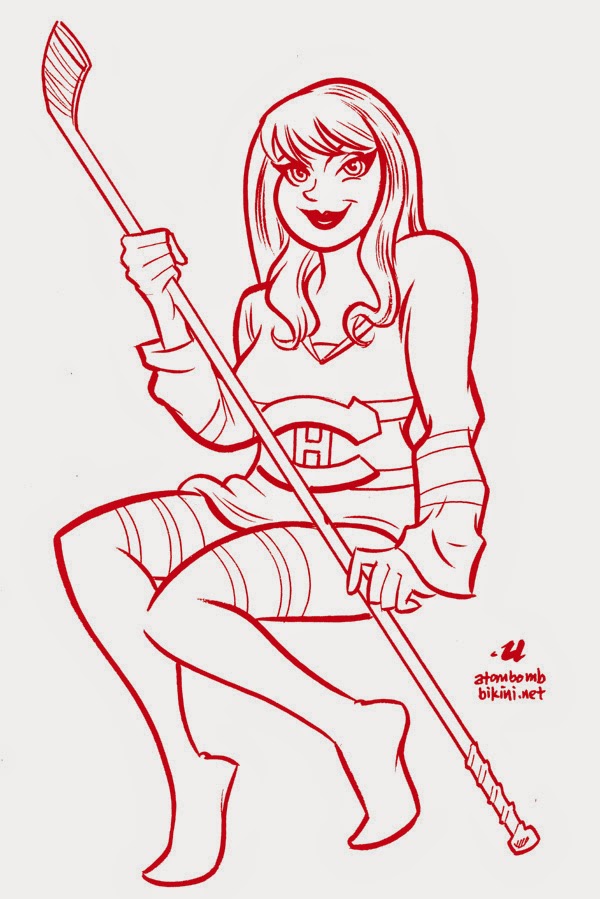 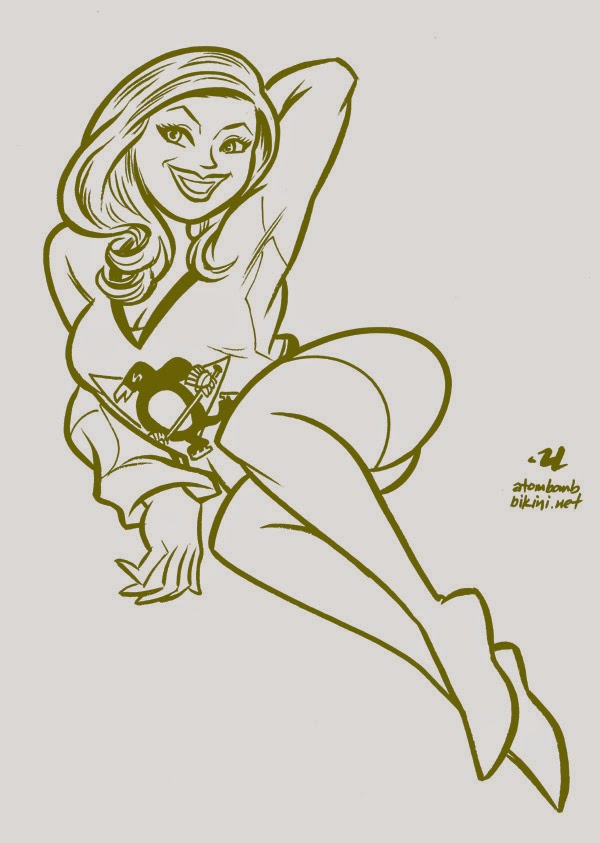 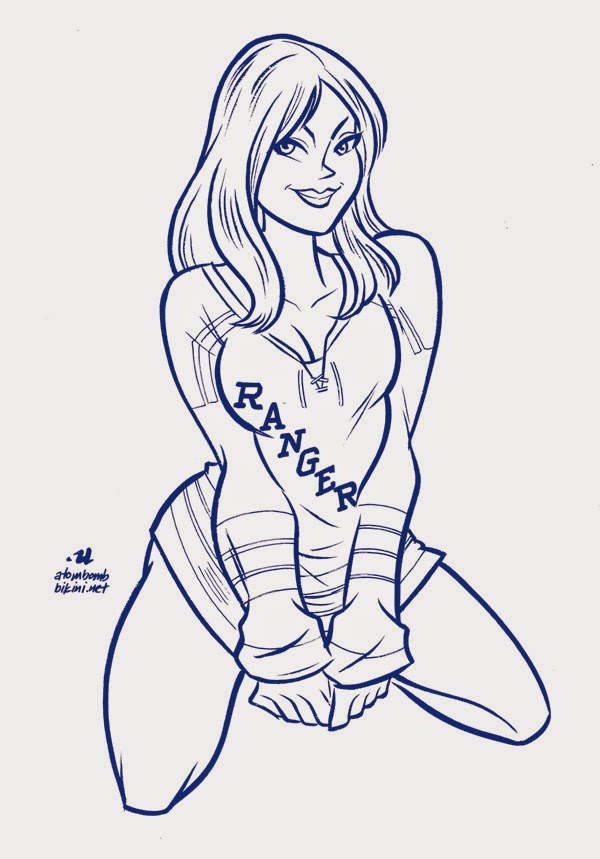 The 2014 Stanley Cup playoffs are here, and it's time for this year's edition of pinup girls, picks to win and of course,the Atom-Bomb Bikini Playoff Challenge! Read through to the bottom of this post to see how you can win some art, books, stickers and other great stuff!

The Ducks tore through the first half of the NHL season, and looked fairly unbeatable as the calendar flipped to 2014. They came back to earth a good bit, and lost their bid for the President's Trophy before gaining steam and finishing strong. They can score in bunches, and are very deep in net. The Stars finally broke back into the playoffs after some close calls the last several years. New coach Lindy Ruff, jettisoned by Buffalo, seems to have brought a winning attitude to Dallas, along with a ton of playoff experience.

Ducks coach Bruce Boudreau has had a rough time of it in the playoffs despite a sterling regular season record. All the pressure is on Anaheim here, but they should have the stuff to best a less-talented (if scrappy) Stars team.  Ducks in six. 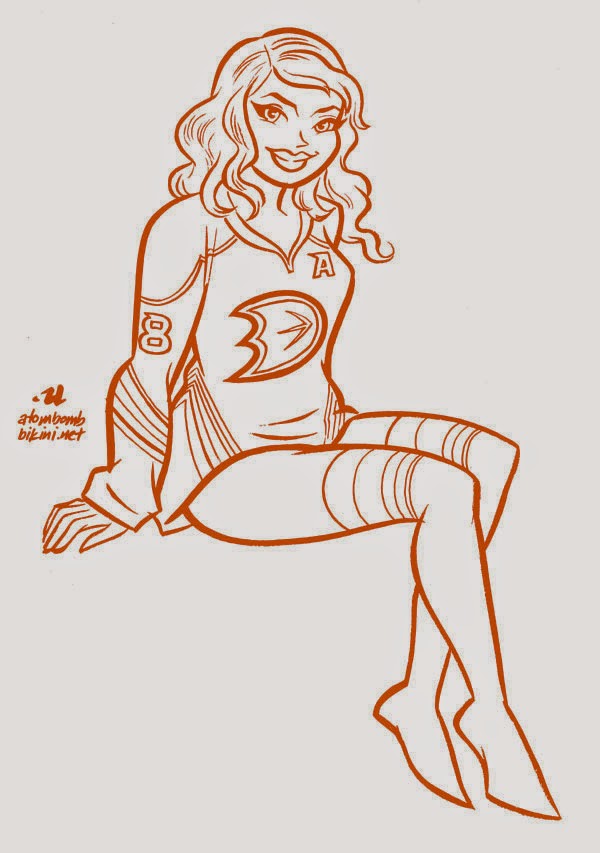 These teams are really similar..they both play a puck-posession game, and like to take a ton of shots... and it'd probably mean a really high-scoring series if both teams' defenses weren't so damn good. Add to that the Kings' season-long difficulty in scoring and the recent playoff dominance of LA goalie Jonathan Quick, and you could very well be looking at a slew of 2-1 games.

It'll be imperative on the Sharks to do just enough to get that extra goal, and I'm betting they will. More importantly, if the rumors I hear are to be believed, San Jose is going to dress in their regular teal jerseys at home, rather than those black alternate monstrosities they've insisted on sporting the last few playoffs. You know what they say... “look good, play good!” Sharks in seven. 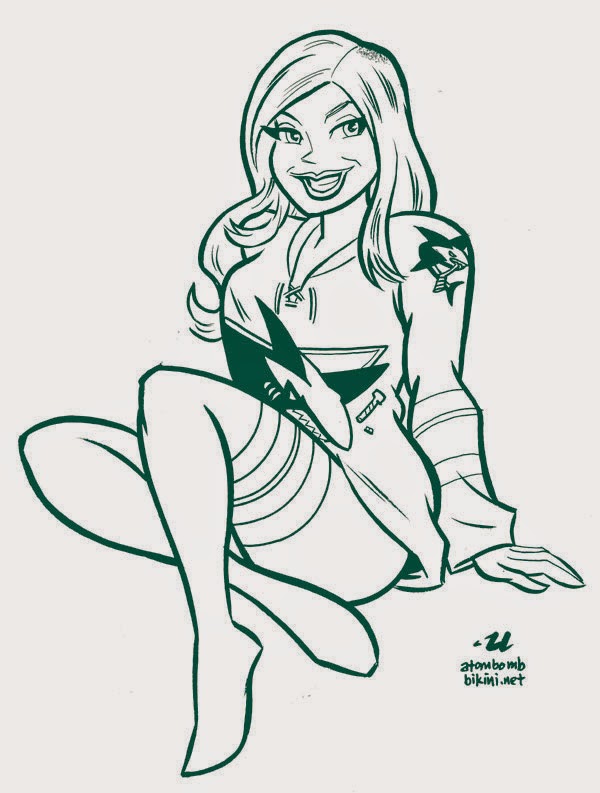 Again, the rules are simple...pick the final four teams you think will be left standing, the conference champions, and the eventual Stanley Cup winner. One point will be awarded for each correct final four pick, two for each final two pick, and three for picking the champion. Whoever has the most points when it's all said and done will take the big prize!

Here's what you're playing for: The big winner will receive a custom piece of original artwork of a pinup girl wearing the jersey of his or her favorite team, along with a copy of my collection of hockey-themed commissions, Bluelines, a copy of Old-Timey Hockey Tales, a pack of Atom-Bomb stickers and a free t-shirt of your choice from the wonderful folks at Original Retro Brand!  Two runners-up will just get the books and stickers...and in case of a tie, I'll put all the names in a smelly old hockey helmet and select a winner at random.

You have until the pucks drop on Wednesday night to enter!

And please, remember to check in as the playoffs progress...I'll post the winner's names here, and at that time I'll look to get in contact with you. And please, do remember to check back! I don't want to have a prize go unclaimed because I had no way of getting in contact with the winner...If you have a Twitter handle or something like that that you wouldn't mind adding to the post, that'd be great. So, enjoy the hockey, and good luck!

Of course, if you'd like to go the extra mile and get a personalized, one-of-a-kind uni-girl illustration of your very own to your exact specifications, that information can be found here.
Posted by Robert Ullman at 5:15 PM 34 comments 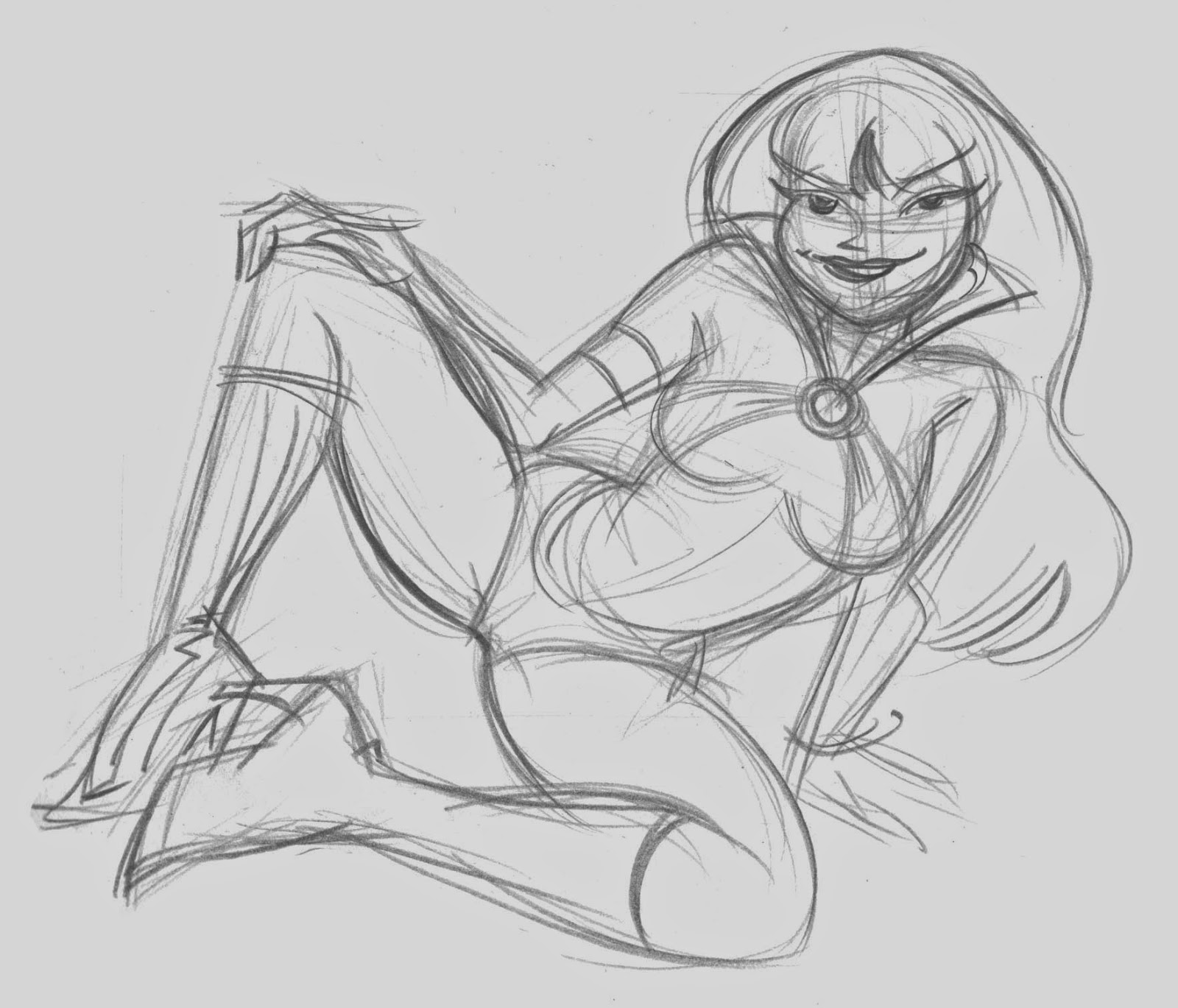 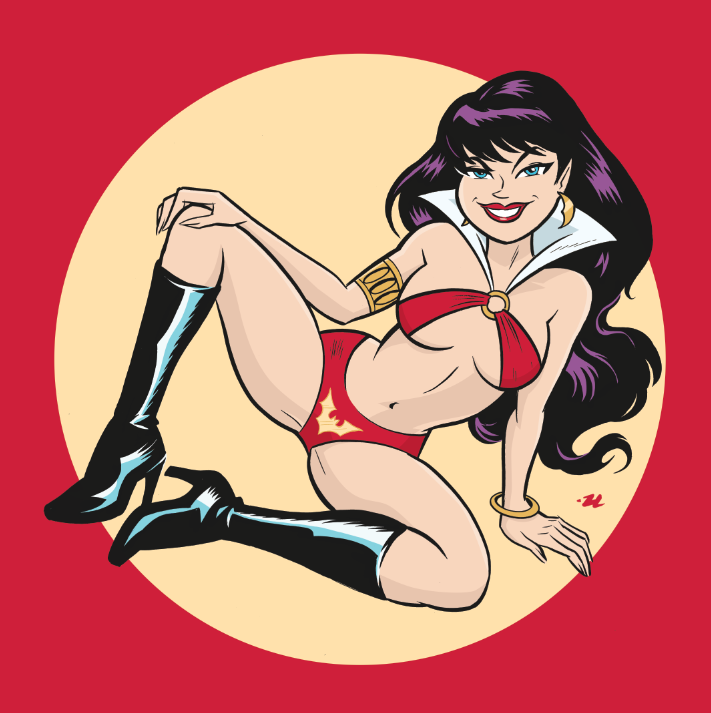