I used to do a hell of a lot more fun stuff on Halloween than I do now...which is a drag, 'cause it's one of my favorite holidays. My old hometown of Kent, Ohio used to close off a few downtown streets so that everyone could slap on a costume and walk around and have a great time...these days, I never seem to know where the cool parties are. Ah well, at least there'll be trick or treating with the kid in a couple years!

Anyways, here's a few random Halloween-centric spots from the archives, and an all-new skelly girl for the occasion! 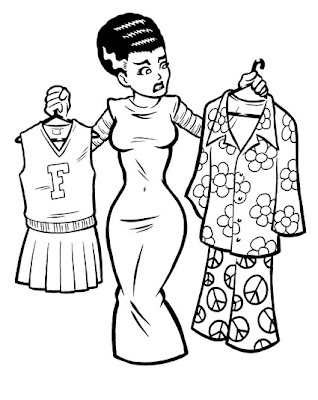 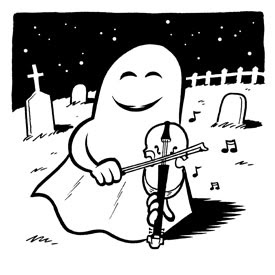 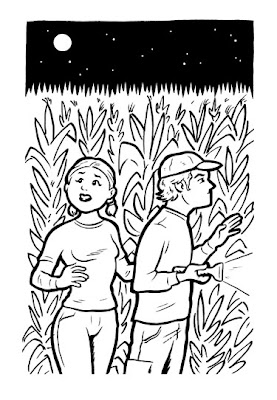 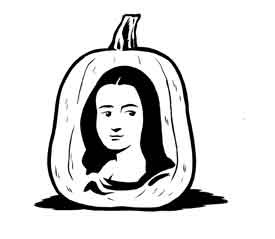 The Stranger tackles perhaps the scariest subject of them all in this week's Halloween issue: DEATH! They take a pretty whimsical approach to the topic, aided by a baker's dozen of illustrations by yours truly. It's funny 'cause it didn't happen to you! Enjoy! 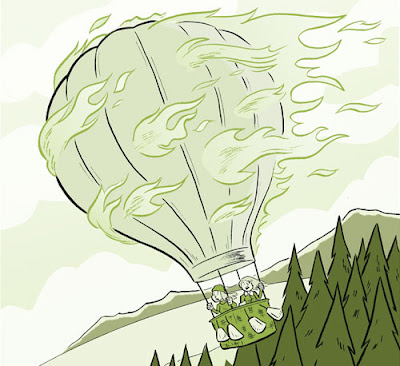 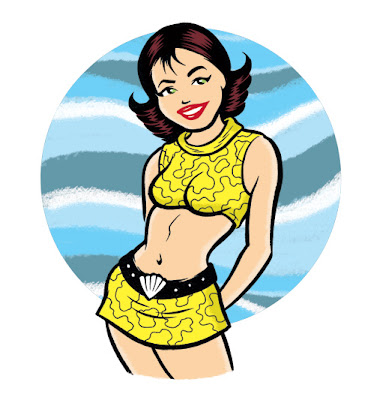 In Savage Love awhile back, a woman wrote in to ask about the commonality of a certain kink: a guy she'd recently met was extremely turned on by applause, of all things. So why would such a guy go to a sporting event, you ask? Maybe he's from Cleveland so he figured he'd be safe... 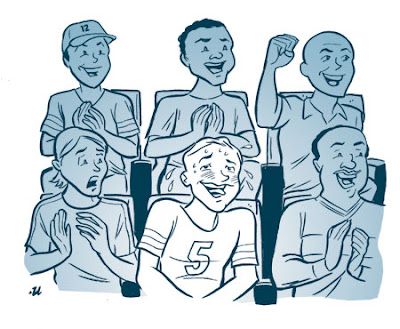 A Quick Note About the Orders

If you're one of the fine folks who ordered Atom-Bomb Bikini #5 or any other books from me recently, thanks! I truly appreciate it. You're no doubt wondering when exactly your stuff is gonna show up, so let me take a minute to give everybody a general update.

I got a huge boost in orders thanks to the Boing Boing post two weeks ago where Mark Frauenfelder reccommended the book. So many, in fact, that it's taken me awhile to get on top of all of them, considering that I was already scheduled to be out of town the following week at SPX, and because a good deal of the books, which are all folded and stapled by hand, had yet to be assembled! Thankfully, I'm just about caught up, and all of the remaining orders should go out by early this week. So if you can just give me a few more days, I'll have your books and stickers in your hands before too much longer!

Again, big thanks to everyone who ordered, and especially to Mark Frauenfelder for the awesome shout-out!
Posted by Robert Ullman at 1:29 PM 0 comments 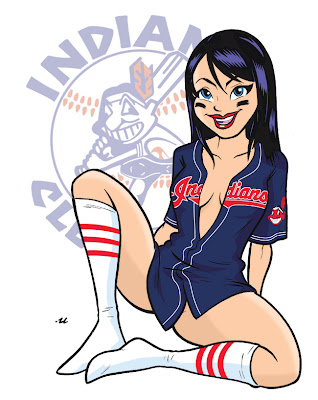 Last weekend at SPX, Scott Rosenberg and Christopher Porter walked up and shoved a camera in my face, asking if I'd do an interview for the Washington Post Express. Being a whore for any attention, I said yes, of course. They asked some good questions, we talked about hockey, it was a blast. The interview, along with clips with over a dozen other artists and bigwigs from the show, is now online for your enjoyment/enlightenment. Thanks, guys!

I'm officially feeling it. Although it might not happen tonight, with the Sox leading in the eighth, I think this is the year the Cleveland Indians finally reach the World Series and win it for the first time since 1948. It's a hard thing to even imagine, after enduring all those last-place finishes growing up in Ohio in the 70s and 80s, and all the close-but-not-quite playoff runs of the 90s. It'd be all the more satisfying, too, should the ALCS victory come at the expense of the Red Sox...Boston fans are some of the most vociferous whiners in all of sports, constantly bemoaning their heartbreak and misfortune despite winning championships in all four major sports in the last 35 years. If any of you fackin' pussies wanna know real suffering, spend a few years as a Cleveland fan! 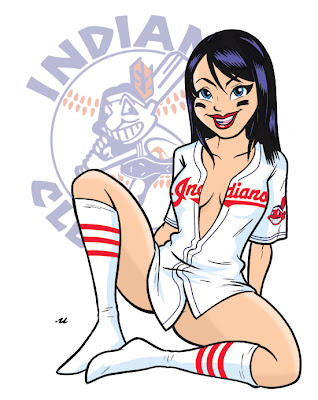 A commission I did for a guy a couple years ago. 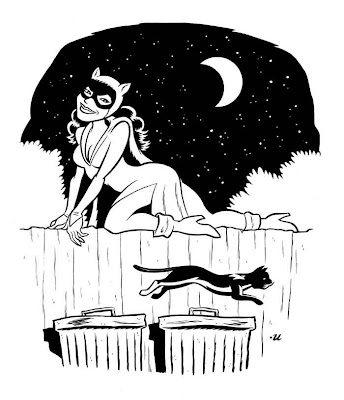 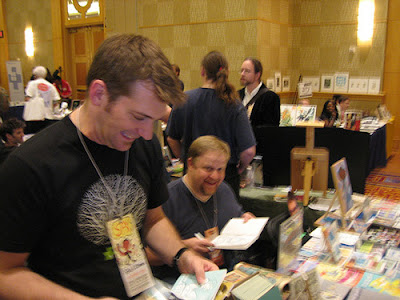 SPX was great! I'll post a more lengthy report once I manage to steal some more pictures, but for now here's a look at all the great stuff I got! 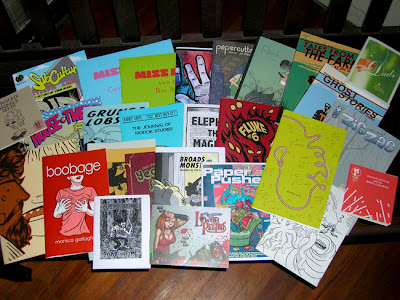 I caught about an hour of that last STAR WARS movie on HBO yesterday afternoon, then came across this quick prush-pen sketch I did of Jedi Knight Aayla Secura right around the time the movie came out last evening. Not using her more was just one of about ten thousand mistakes George Lucas made in making those prequels. 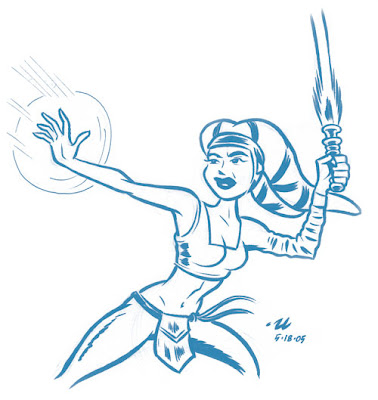 Posted by Robert Ullman at 6:55 AM 4 comments

RKU on the Dollar Bin

A few days ago, the fine lads over at the Dollar Bin posted a short interview I did with their intrepid reporter Adam at the Baltimore Comicon last month. Give it a listen, it'll only take a few minutes. While you're there, you might take a listen to some of the other audio they have to offer, as it's usually quite good!

Also, until I pointed it out, the listing for the interview had my name misspelled as "Rub Ullman". Mmm-HAH!
Posted by Robert Ullman at 8:11 AM 2 comments

SPX 2007 is a mere two days away! Man, I love me some Con Season. On the merch front, I'll have internet sensation Atom-Bomb Bikini #5 on sale, my new stickers, and even a little pin-up girls button set! Also making a return appearance at this year's show: The Original Art Fire Sale! So for god's sake come on out and see me and my pal J. Chris Campbell at table #H15-16...It's gonna be a party!

I've been reading a lot of Kirby lately, specifically the handsome Fourth World Omnibus volumes produced by DC. One of the bigger surprises in reading these stories is how much I've been enjoying the Forever People chapters. I've long been aware of the book, but never really gave it much thought, thinking it looked too corny even for a Kirby fan like myself. I was right about one thing...it is completely corny, but also completely entertaining. If comic books were still like this I'd probably buy a lot more of 'em. 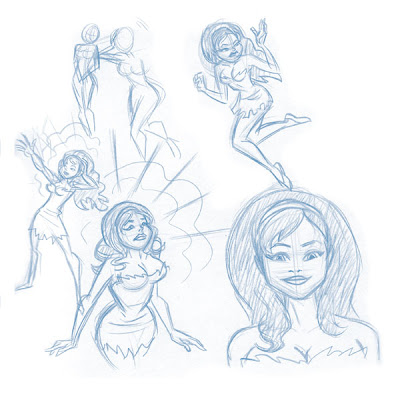 Posted by Robert Ullman at 8:52 AM 2 comments 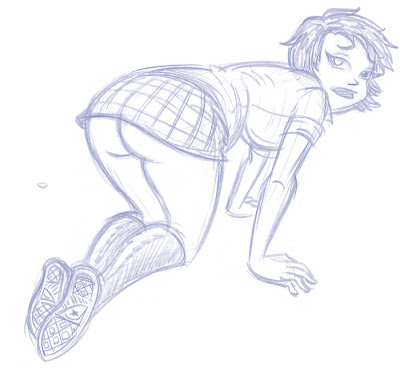 So the Ullman clan took a nice little jaunt up to the nation's capital for the Washiington City Paper's fantastic Crafty Bastards Arts and Crafts fair last weekend. We drove up on Saturday afternoon (didn't want to leave too early, as we were making our first non-grandparents overnight trip with the midget, and you just never know how a three-month-old is gonna react to a whole mess of unfamiliarity) to Brooke's BFF Alycia's house, smack dead in the middle of the gritty city. Had a fine dinner of Gino's East Deep Dish Chicago Pizza (delivered directly from the restaurant in Chi-town) with Alycia, her husband Jim, her brother Aaron and mom Linda, who are just about the nicest goddamned people you could ever hope to meet. Later, not even a close, exciting Florida-Auburn football game could keep me from falling asleep by a little after ten.

A little after nine the next morning, the girls dropped me off at the Marie Reed Learning Center in Adams Morgan to get ready for the show. The whole shebang is held outside, and the weather was fantastic. I checked in with PopIdiot pal Kelly Alder and threw my table together. I had some new goods to sell (Cartoon Cuties stickers and button set, Atom Bomb Bikini #5) , and I was really anxious to see how they'd do with the public.

The next seven hours are a blur of confusion, conversation and commerce. The people really turned out for the show...it was crowded all day long. So crowded, in fact, that aside from a few trips to the Port-o-let, I didn't have a single chance to walk around and check out the other booths. It was a madhouse. It was a mad-hizzouse! Brooke, Evie and Alycia showed up at around noon after grabbing some lunch, as did my BFF Billy Burg with his wife Laura and little girl Addie. Unfortunately, with all that was going on, I didn't get to shoot the breeze too much...but it's always a treat to see the guy!

A little before five, I closed up shop and packed up my things for the return trip back to Richmond. Evie, who'd been an absolute trooper all weekend long* needed a bottle and a diaper change, so we stopped at a Burger King along I-95 and decompressed a bit. Good thing too, because without food in our bellies and a clean diaper on the midget, the hour we spent in crawling traffic twenty minutes north of Richmond might've resulted in disaster or homicide, rather than just abject frustration.

*Really, I can't say enough about this kid. In the face of all kinds of visual stimulation and a sea of loud noises, not to mention being held by like twenty different people in the space of 24 hours, Evie kept her cool completely, never got more than a little fussy, never freaked out and screamed...she just did her thing, napped here and there, smiled a lot and basically showed everyone that she's the cutest baby ever. How lucky am I? 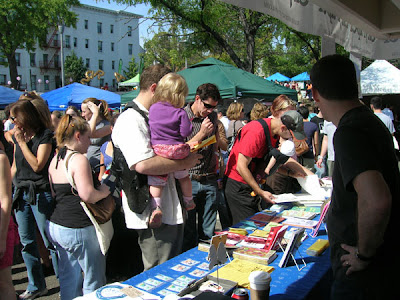 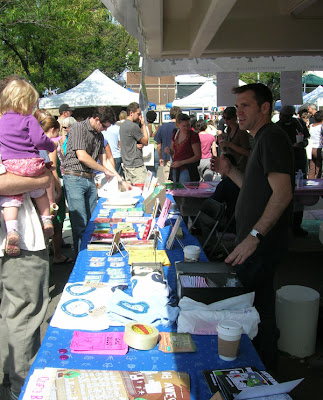 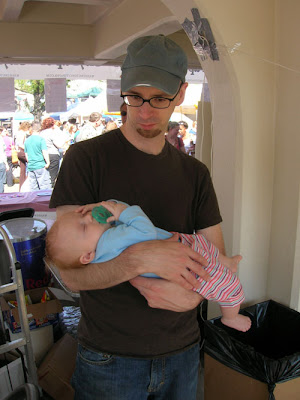 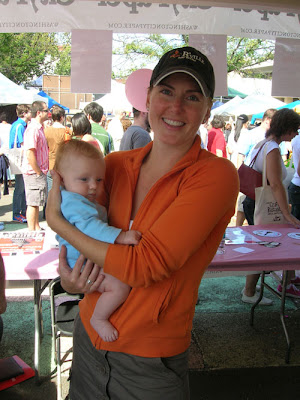 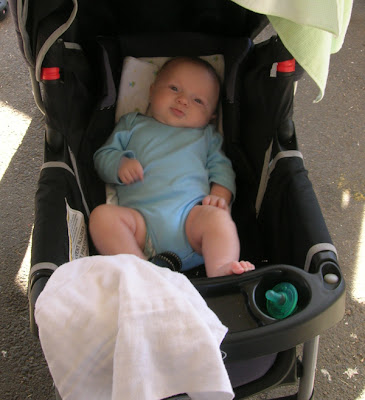 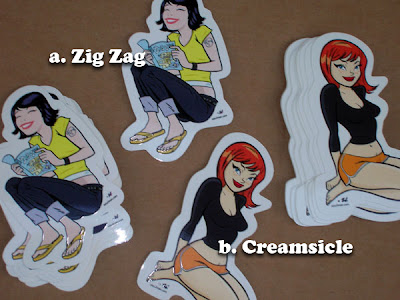 As I mentioned in Saturday's post, my stickers are printed and have arrived in my hot little hands! I'll be updating the Merch page of robullman.com eventually, but for now, if you're interested, you can order them right here using the PayPal links provided below!

Screen-printed on high-quality vinyl, these stickers are UV coated and designed to take a beating, holding their color without fading for upwards of five years! Each is $1.50, with an additional fitty cents added to cover postage and fees. Stick 'em anyplace that could use a little cuteness!

And remember, if you were one of the first five responders to my focus group a few weeks back, you have a free sticker coming! Email me your address and your choice, and I'll get it out to you pronto!