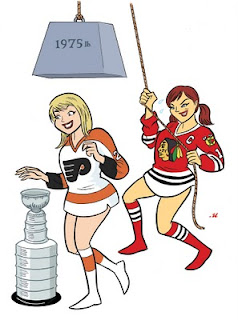 What an interesting final. Lots of storylines and interesting facts here. For one thing, a longstanding trend will be broken, as either team has won it all in a loooong time; 35 years for the Flyers, nearly 50 for the Hawks. In fact, each of these teams was swept the last time they made it to hockey's biggest stage. You know the TV networks gotta be loving it, with two of the nation's biggest cities represented and a chance at boffo ratings (if the people in those cities have any damn sense).

Now, the Blackhawks...I gave them a good chance of being here since the end of last season (though I did have a stint there where it was looking, at least to me, that it was the Canucks' race to lose). But the Flyers? I've enjoyed their misfortune all season...from their hilarious goaltender troubles to their having to squeak into the playoffs with a shootout win on the season's last day. Still, I had to hand it to them when they continued their season-long mastery over New Jersey in the first round. They ended up playing fellow Eastern Conference red-headed step children Boston and Montreal, as even-money a trifecta as you could hope for, to advance to the finals. Now here they are, and you gotta give them credit for it.

To be honest, once the Penguins ignominiously bowed out, I wasn't sure I'd even keep doing hockey previews the rest of the way...but historical affection for the Blackhawks and, more importantly, disdain for the Flyers won the day. I'm glad it did, because I LOVE this image!

Considering the roll Chicago has been on, I can't imagine the Hawks having too difficult a time with the Philly, who frankly just aren't used to seeing the type of competition they'll see this weekend. The hockey fan in me wants to see a long, entertaining series...but the Penguins fan in me, the fan who hates the Flyers with the burning intensity of a thousand suns, wants to see them swept and humiliated. Even considering this series going longer than six games leaves way too much to chance for my liking...but I ultimately don't think that'll be a concern. Blackhawks in five, meaning they'll win on home ice and we'll have to hear that awful Fratellis song about a thousand more times. Annoying, yes, but better than seeing the Flyers win.

(Hey, I got through this entire post without even once mentioning Maid Marian! I guess I've finally moved on! The thought of Daniel Carcillo and Scott Hartnell's names on the Stanley Cup will do that to you.)

"On March 30, 2009, it was announced that the Bombers would not be playing during the 2009–2010 season. Despite the arrival of the International Hockey League's Dayton Gems, the Bombers had not folded nor planned to relocate yet, and continued to aim towards securing additional investors and season-ticket holders to play in Dayton once again for 2010-11. However, on June 25 of that year, the Bombers owner turned the team's membership back to the ECHL, citing lack of a suitable business partner or re-entry plan." 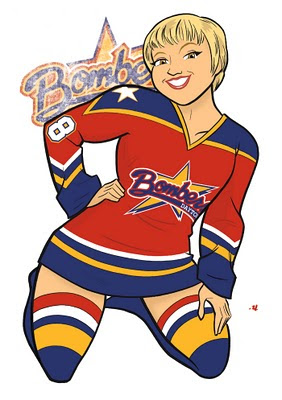 Posted by Robert Ullman at 9:36 AM 1 comments

They were my pick to reach the finals in the west, but it just didn't happen. Still, enjoy this illo, Canucks fans, and remember that the new season is only four months away! 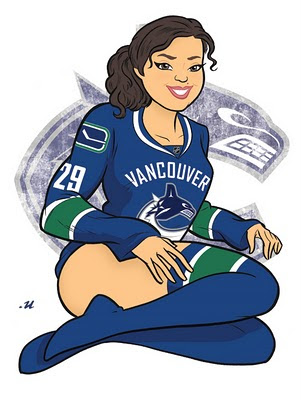 Posted by Robert Ullman at 8:56 AM 4 comments 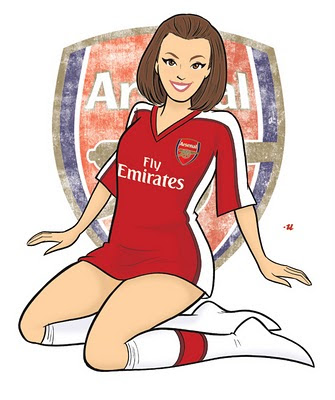 Never Talk About Religion or Money 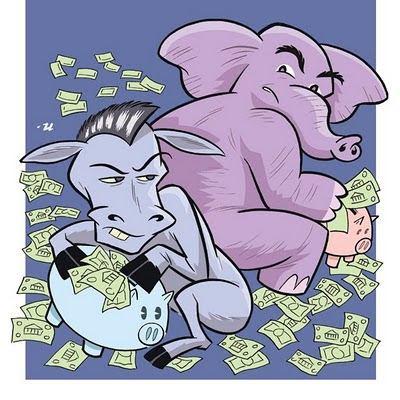 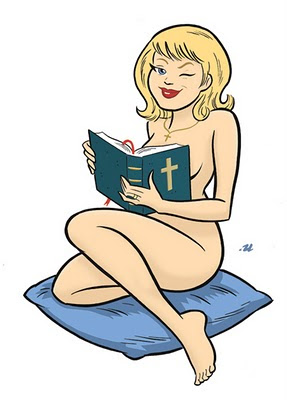 Maybe shoulda made that "Leastern Conference".

Philly makes the playoffs on the very last day of the regular season, needing a shootout victory to do so. Montreal knocks off the President's Trophy-winning Capitals and the defending champion Penguins, making it look easy much of the way. And here they both are in the Eastern Conference Finals. That's the Stanley Cup playoffs for you.

Gotta admit, though I have a soft spot for the Habs (much like the Hawks and Sharks out west), I'm really not feeling them too much this season, which I suppose is to be expected after their drubbing of the Pens. But I absolutely loathe the Flyers, and everything they stand for.* Much as I think it'd be hilarious for Philly to beat Montreal, get to the Cup Finals, then get swept by either Chicago or San Jose, that scenario leaves way too much to chance...especially in a year where absolutely nothing makes sense.

Anyway, to cut to the chase...I think Halak waits until the finals to melt down, and I like theCanadiens in six. 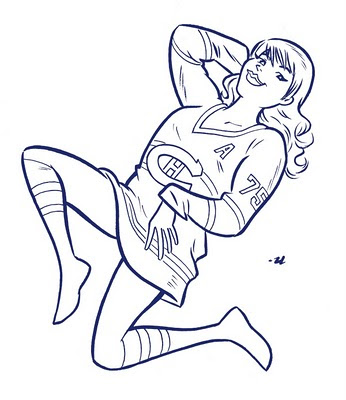 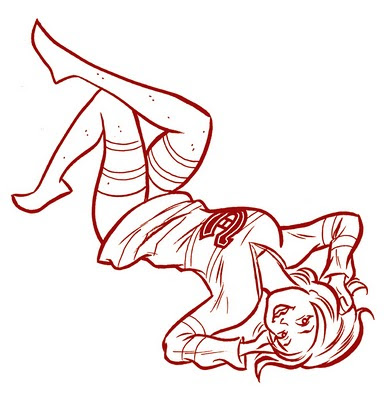 * Has anyone caught the "Broad Street Bullies" special currently airing on HBO? It's tremendously well done, but unlike other such documentaries, where I finish watching and feel ...I dunno, a respect, I guess, for the team profiled, even if it's one that I don't usually like...this one left me hating the Flyers more than ever, with their goon mentality and the shit-for-brained fans who come to every game demanding to see a fight. Nothing I'd like to see more than 35 more years of failure for that organization.
Posted by Robert Ullman at 12:48 PM 7 comments 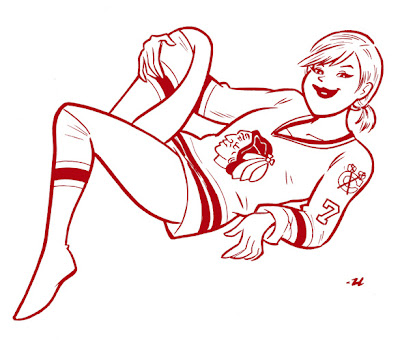 CRASS COMMERCIALISM DEPT: All of the original, hand-drawn art for the Stanley Cup pinup girls is available at my Etsy store...and if you'd like to go the extra mile and get a personalized, one-of-a-kind uni-girl illustration of your very own to your exact specifications, that information can be found here.
Posted by Robert Ullman at 8:48 AM 5 comments

It's been a great day hanging with the fam, enjoying a picnic at Maymont with the girls. And here are a few mom-centric illos from Richmond magazine to mark the occasion! 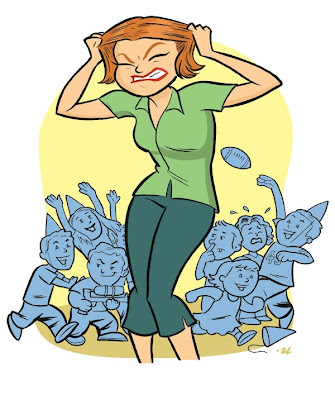 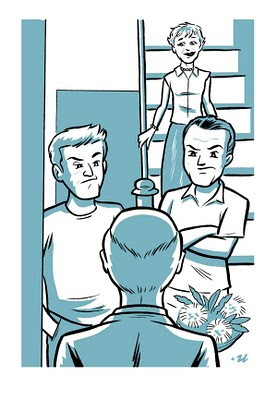 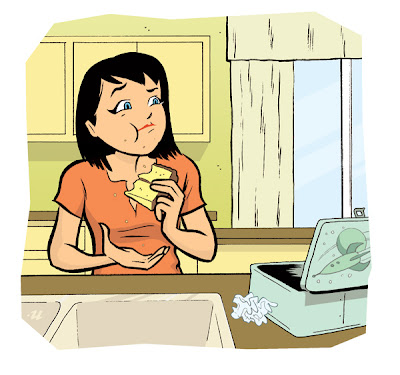 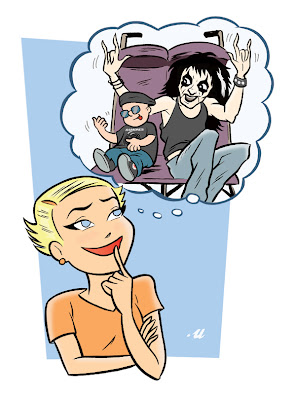 I did this a few months back for a friend to use as an engagement/save the date announcement. Wedding's just around the corner. Congrats, A & C! 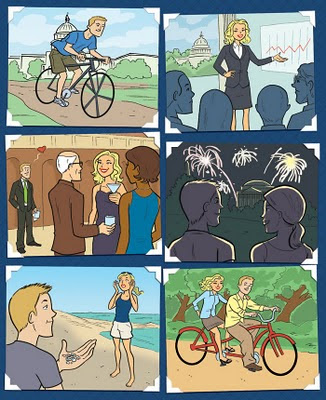