My friend Patrick told me yesterday that my comic about Terry Sawchuk, the Red Wings goaltender, had earned a spot on the list of 100 Distinguished Comics in the recent Best American Comics 2006 collection, compiled by Anne Elizabeth Moore and Harvey pekar and published by Houghton Mifflin. Basically, the story was good enough to be mentioned, but not quite good enough to be printed in the book. Either way, it's really nice to be recognized. If you're interested in reading the story, it's from Old-Timey Hockey Tales #1, and is available here. 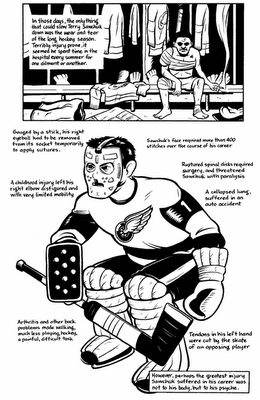 Now that I've managed to get ahold of some pictures (thanks Mr. Gammon!), here's the word on SPX 2006!

The big news this year was the change in venue, a couple miles north to the huge Marriott convention center. Having had the good luck of being placed in the big room for most of the years the show was held at the Holiday Inn, moving all the exhibitors into one big room was a little less important to me personally, but nonetheless a fair and right decision. Every year at the old place I'd see those poor schlubs in the two smallest rooms and think "I hope I never end up stuck in here." Which isn't to say a lot of people didn't have some great success there...but I think giving everyone equal placement is a good idea. The hotel itself was really nice...although the staff there at times didn't seem to know what to make of all these drunken geeks shuffling around pulling beers out of their messenger bags. I heard that we just about dried out the bar, and that was with all the cheapos (myself included) smuggling booze in at every opportunity. One irritating curiosity was the lack of a usuable staircase. We got hollered at by a security guard for using what turned out to be the emergency steps Saturday night, taking a shortcut up to the second floor rather than waiting twenty minutes for a turn at the elevator. Really, you've got something like ten floors, and two elevators, and NO USUABLE STAIRS? Eat my shorts, rentacop.

The surrounding area left a lot to be desired. It was actually not bad considering all the other places where cons are held in the States...think about the area around the Charlotte Convention Center, or the Concourse in SF, or the Chicago Comicon, or the old SPACE location in Columbus (fuck that's a lot of "c"s...oh well, C is for comics, I guess)....but but one of the best things about SPX was being able to step right out of the hotel and walk the lovely streets to dozens of restaurant, that beer and wine store a block over, Big Planet Comics....this new locale is definitely missing that aspect. But if you tried a bit, you could find some nearby, walkable gems (even though McD's owns 'em, I love them Chipotle burritos). And having the staff hand out maps to local restaurants was a much appreciated and thoughtful idea.

So overall, I'm pro-new space. It's not quite as good aesthetically, but it solves a good deal of the problems the show's faced over the recent years, and if it keeps SPX thriving (and all evidence shows that it is) I'm all for it.

Now, to back up for a second...the night before the show, the Wide Awake fellas from Greenville, SC (heretofore to be known as the Greenvillians) drove up and crashed at my house in Richmond. By good fortune, Andy Runton and Rob Venditti from Top Shelf were only a half-hour or so behind them on 95, so they stopped in too and stayed for dinner. It was a blast...Mrs. Chappy stepped out for BBQ and a couple sixers, and we had a great little impromptu party. To her credit, Brooke was a wonderful and gracious host, even though she had to've felt like Dian Fossey among the apes. I'm one lucky dude. See the pics below.

(One wierd aside, re: the party, that'll only make sense to folks who've met my dogs...notice that Puck (the Golden Retriever) is in a bunch of the pictures, while Betty (the Black Lab) is nowhere to be seen. That's so odd, 'cause usually Puck's the one who freaks out at strangers, barking at them and occasionally scaring the poop out of 'em, while Betty would welcome a burglar with kisses. Thursday night, not so much. Puck was on his best behavior, and Betts was invisible.)

Justin, J.Chris, Duane, Jamie, and I packed the rented SUV full of a ton of our crap, and set out for Bethesda about 10 Friday morning. About three hours and a thousand mom jokes later, we arrived at SPX. Contrary to what I've seen reported by others, Friday was great for me...although it might've been repeat customers coming by early to beat the rush. Saturday was even better...which is just amazing. This was my ninth SPX, and each year, its gotten better (I keep waiting for the streak to end, but I hope it never does.). I made some great new contacts, and saw some old pals.

Both nights involved a lot of drinking, as usual...SPX is about the only time I ever get to hang out with my pal Mark Way, he of the oh-so uncomfortable humor. He's one of the funniest people I know, more so when he's had a few. My friend Bill came down from New York, but it was so busy at the show that we only had one lunch at McDonald's with another friend, Eric, to chat and try to catch up. Business and browsers kept me too busy to walk the floor much, too...I picked up a few nice little items, and took a few chances on some unfamiliar stuff as well (they tell me that's how you discover the gems). I managed to miss KRAYON'S EGO, a book I've been waiting for for years without realizing it. I did get to read someone else's copy...Hilarity, indeed. A lot of the other stuff I figured I'll just pick up at my shop so I'll get a discount and I wouldn't have to lug it home. Woulda liked to have grabbed that Dedini book, tho'....

Christ, this is rambling...Wrap-up party at Dave and Buster was surprisingly fun, though owed probably more to the company than anything. I had a great, inspiring chat with Chris Staros, played some video games with Chris Pitzer, Scott Morse, and Jacq from Top Shelf, got my ass kicked in Basketball by Brett Warnock, and kicked the computer's ass in Galaga, a game I still rule at after twenty years.

Oh yeah! I forgot to mention how the program cover I did turned out...It was awesome! Everybody seemed to really dig it, and there's really just something incredibly cool about seeing everybody carrying around a book with your art on it, even if it was free. Major thanks to Karon Flage and Steve Conley for giving me the gig, and to Greg McElhatton for telling me that the show likes me.

Wow, you're a patient one, aren't 'cha. As a reward, here's what you came for: the pictures! My apologies if you aren't in any of 'em. 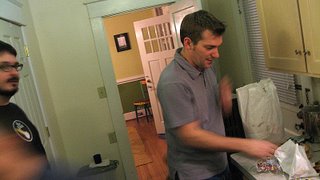 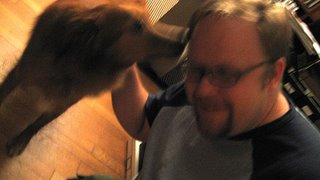 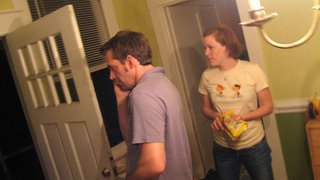 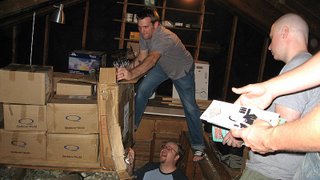 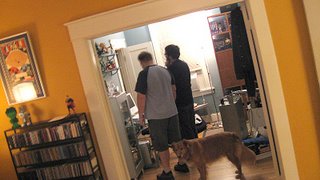 Arts and Crafts the Night Before: 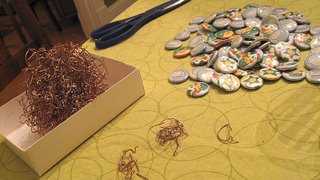 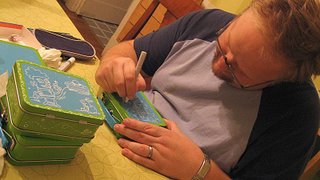 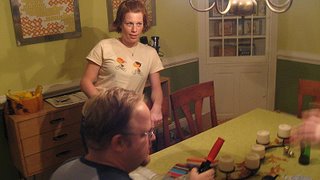 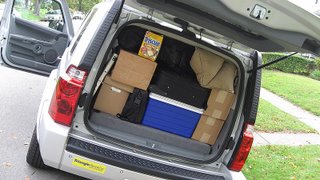 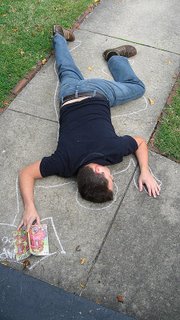 The Show (at this point, you can make up your own captions): 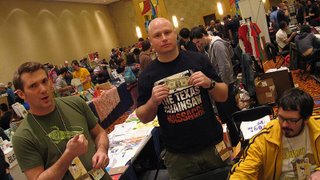 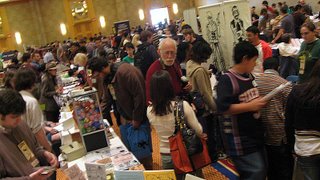 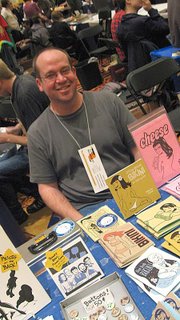 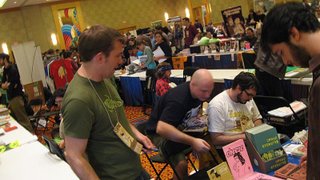 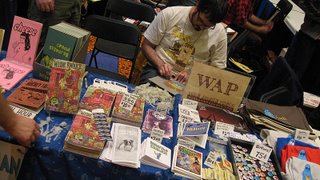 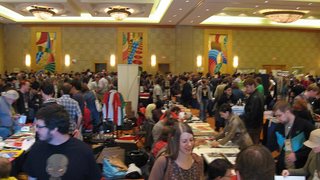 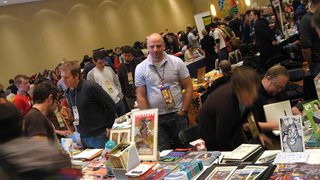 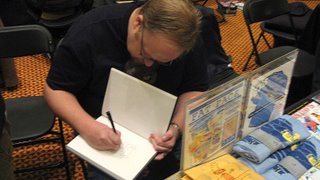 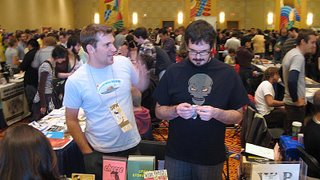 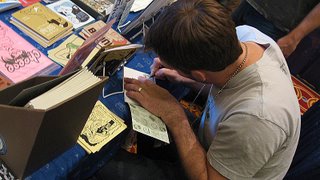 I'm not even sure why, but I'm really digging this spot I did up for this week's SAVAGE LOVE. 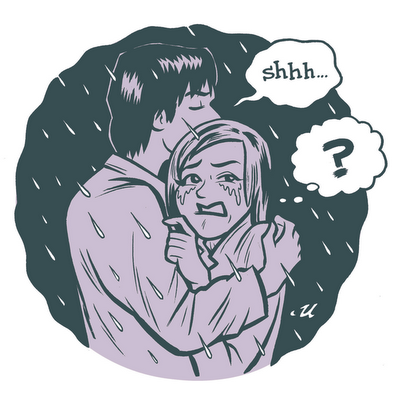 What a shock...SPX was awesome again! More details later, once I have the opportunity to steal and post some pictures from my pal Justin.
Posted by Robert Ullman at 9:45 AM 2 comments

It snuck right up on me! SPX is this weekend! I'll be parked next to Wide Awake Press all weekend, and we'll be shilling the new WIDE AWAKE 666 anthology, and well as all my other books, original art, and maybe even some buttons.

Best of all, they asked me to do the cover for the program book, and I was thrilled to oblige. Here it is! 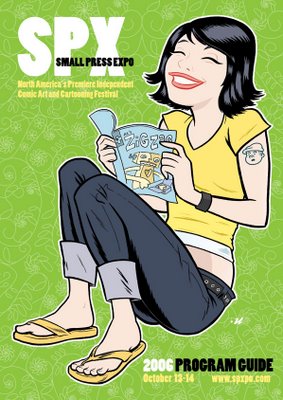 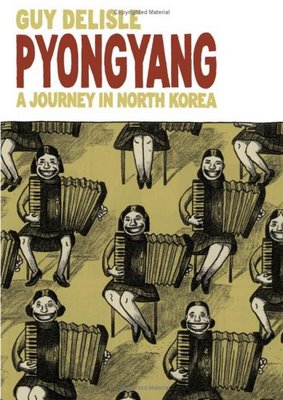 Now that the new issue of Richmond Magazine is on the stands, I've gone ahead and posted the entire Brave Old World strip from last month's ish for your enjoyment. More than you ever wanted to know about baseball in Richmond, and just in time for the MLB Playoffs! 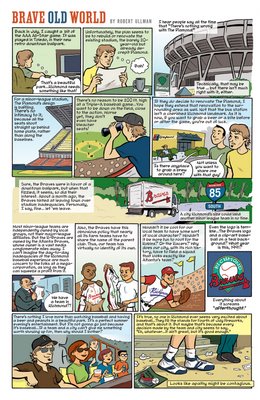