Speaking of Namllu, who can forget his memorable first appearance, all those years ago? 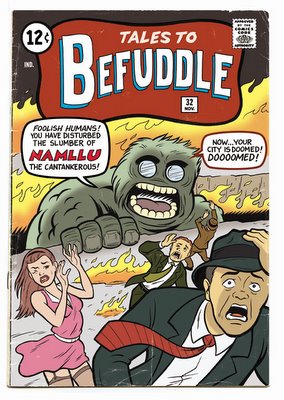 This week: Some Namllu and Ultra-Lass sketches, plus, big surprise, a girl taking her top off. 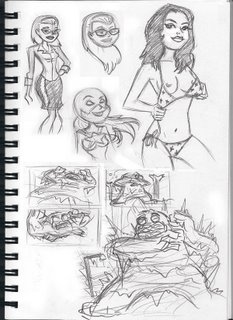 I've been working on a biggish project the last six weeks of so, a series of spot illustrations for a book. I'm about 3/4 of the way through them, but unfortunately, I discovered today that the client has filed Chapter 11 and the project (and more importantly, any hope for compensation) is dead in the water. It's not a catastrophic amount, but it's big enough that it's gonna make things pretty damn difficult for the next few months. I'm frustrated because I feel like I probably should've demanded 1/2 or 1/3 of the payment up front before even beginning to work on the project. I used to do that, but I guess I was lulled into a false sense of security after having had no problems or issues with clients over the last ten years. I suppose I need to stop worrying about putting prospective employers off with a slew of upfront demands. This is why I need an agent...deep down, I know I suck, and that I'm lucky to get any work at all, and that, if challenged, I'll back down and admit it. A representative would keep fighting, not paralyzed by my lack of self-worth.

On the plus side, I finally got an illustration into Entertainment Weekly...sort of. They placed Make Magazine on their hit list of notable music, books and games in the bonus "Listen to This" section (in the Steve Carell issue), and the cover they reproduced featured one of my illustrations. The cover is reproduced at only about the size of a postage stamp, making my drawing infinitesmial (I missed it myself, to tell the truth), but it's there on page 12 if you wanna take a gander.

Here's a closer look, in case you don't have a loupe handy. 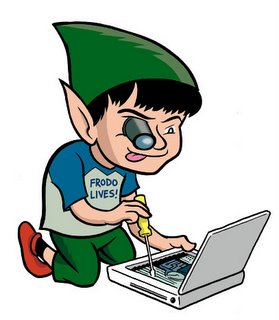 This week's Savage Love column deals with a woman waking up in the middle of the night to witness something very disturbing. Since nobody conveys late night creepiness better than Charles Burns, I tried to take a similar approach when I inked the spot. The results? Not bad...although I'm not sure if appropriating someone's inking style can be considered plagiarism. Any thoughts? 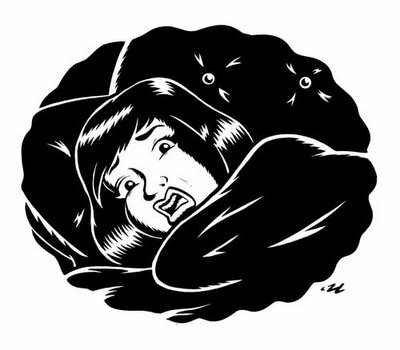 Have You Ever Seen "This Island Earth"? 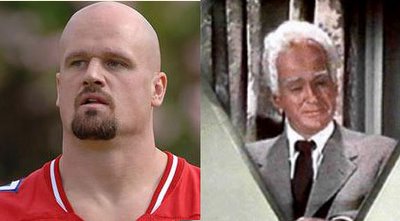 Tennessee Titans defensive end Kyle Vanden Bosch is a dead ringer for Exeter, at least in this photo from ESPN.com.
Posted by Robert Ullman at 10:29 PM 1 comments

The reference for this one comes from the Jam section of the Drawing Board website...at the beginning of each month, new photos are posted (usually of ladies, 'natch) and everyone takes their turn. I don't always participate, but it's a great li'l excercise! 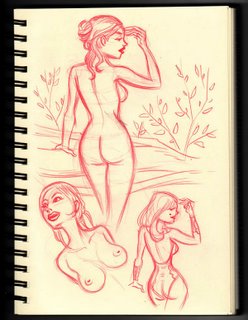 Here's hoping the Christians are a lot more forgiving (or at least less outwardly murderous) than the Muslims when it comes to cartoons. But hey, I'm just doing my job! 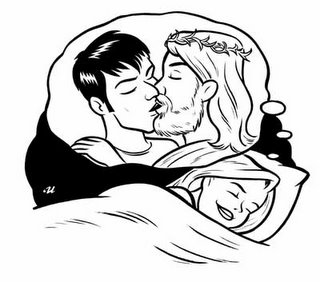 I've had a hard time concentrating this week...even harder than normal. With my beloved Pittsburgh Steelers playing in Super Bowl XL this weekend (and with a decent chance to win), all I've been able to think about is the big game. Now, most of the folks I know, and the artists in particular, couldn't give a squirt about football, so I've kept this obsession to myself. But now I think I've finally come up with a way to catch everyone's interest in something sports-related.

I don't know how easy it'd be to do complex dance moves in work boots and a hardhat, but that's not my problem. I'm just the idea guy.

Obviously, I need help. But rest assured, after this weekend I should be back to normal...unless I'm in mourning, which I don't even want to think about!
Posted by Robert Ullman at 6:50 PM 2 comments