In between paying gigs (and obsessing about the Steelers) the last few weeks, I've been making some headway on this little mini-comic I'm doing for Wide Awake Press, scheduled to debut at APE in San Francisco in April. It's a super-hero story, with lots of pretty kick-ass action, but firmly in keeping with my sensibilities (i.e. people are lonely and wookin' pa nub'). It features several characters from the "Ullmanverse", including Namllu and Zip Zapper, and a new character I'm currently referring to as Ultra-Girl. We'll see if it sticks.

Anyhow, here's what you're here for. Enjoy! 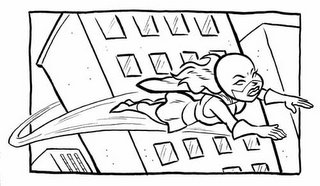 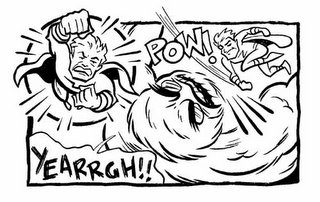 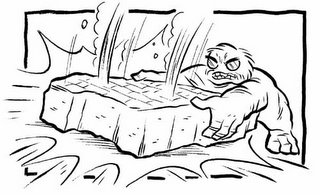 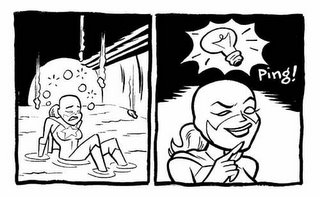 Have you ever been drawing or inking, and it's not coming out right, and you just get all pissed off and feel like breaking your pencil or brush in two? Well, occasionally I do just that. 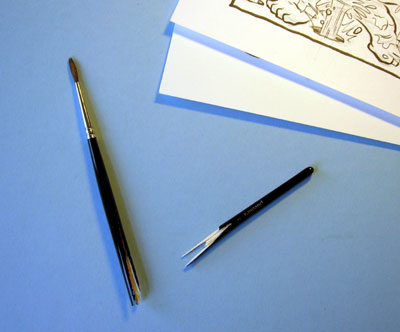 Yep, that's a Windsor-Newton Series 7 #2, the gold standard brush for comic-book inking. About $20 a pop. I bought a couple from Dick Blick a few months back at a pretty sizable discount...but for some reason, the thing never worked right. I usually use a Series 7 for three or four years before I wear it out, but this thing went bad right away, with stray hairs everywhere and a tendency to split which made it near-impossible to keep a point. So, fuck it. Better luck next time.
Posted by Robert Ullman at 11:16 AM 1 comments 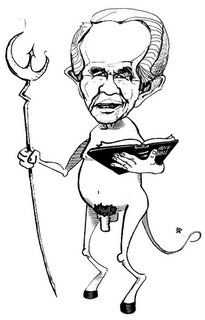 A little late for a year-end list, but this one's so good it gets a pass. From BEAST: the 50 Most Loathsome People in America, 2005. It covers everyone, from politics (more right than left, 'natch, but after all, they're worse) to pop culture. Well illustrated, too...Dig that Pat Robertson!

Still, while it's funny as all hell, the Hillary Clinton entry drives home the sad fact that the Repiglicans are probably gonna win the next election...as great as having Hillary elected would be strictly from a revenge standpoint (I imagine 10% of Republicans would expire immedeately, their hearts exploding with rage right in front of the TV as the returns come in), it's never gonna happen. But we'll probably hitch our wagon to her anyhow. And now that Canadians have proven they're as fucked up as Americans are, I don't know where I'm gonna go when Rick Santorum is elected president!

Whatever. Chances are humanity will be wiped out by some environmental cataclysm or another in the next hundred years anyhow, so I'll just keep drawing titties and try not to worry too much about it.
Posted by Robert Ullman at 10:58 AM 0 comments

As promised, here's the finished product. Maybe I'll even color it one'a these days... 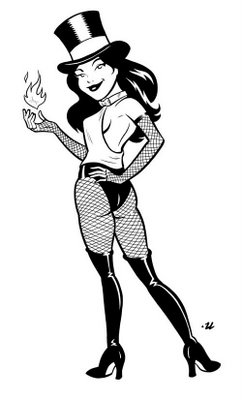 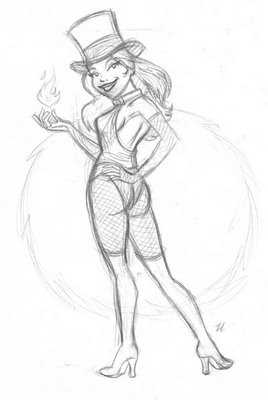 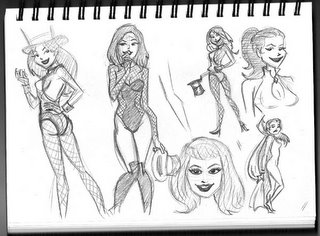 And while I'm on the subject of the Maid of Magic...I noticed earlier in the week that DC had solicited a new Zatanna action figure as part of its Alex Ross "Justice" line. Like the other figures in the line (and pretty much everything Ross does), it's creepy and overdone. But what I really can't get over is how...boring it is. I mean, it's a lady in fishnets and a top hat...yet it has all the sexuality of a K-Mart lingerie ad. How can you screw that up? The same goes for his Black Canary figure, which came out awhile ago. I can't imagine this guy has ever had a boner in his life.
Posted by Robert Ullman at 8:01 PM 0 comments

I was watching TV late the other night, having just read issue #4 of the ZATANNA limited series and the latest issue of CATWOMAN, also featuring the Maid of Magic. I grabbed my sketchbook and a pencil and scribbled these little doodles. Funny thing is, I barely remember doing it...I was actually kinda surprised when I saw them the next morning! I sure don't remember saying "tegrof sehcteks!" before I went to bed... 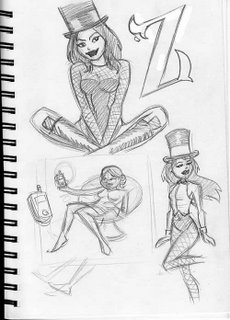 The January issue of Richmond Magazine features a big section on the large amount of folks working in the comics industry here in our fair city, with interviews and profiles of creators like Tom DeHaven (author of the astonishing novel It's Superman!), AdHouse publisher Chris Pitzer and cartoonist Becky Cloonan, among many others. It also features a strip on the "life of a cartoonist" by yours truly. Here's the funniest panel:

If you want to read the rest, check your newsstands for the issue, which might be available at your local B&N or Borders, depending on how extensive the selection. Hopefully, I'll be able to post it here someday soon as well. I'll be curious to hear what'cha think!
Posted by Robert Ullman at 1:50 PM 0 comments

More ladies, as they seem to be a crowd pleaser. Apologies for the bad repro of the blue pencil lines!

I'll try to post something besides T&A sometime soon, honest! 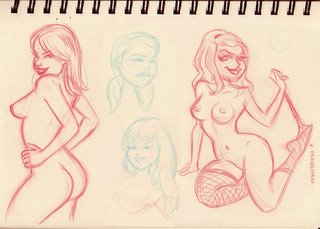