Here's a recent commission I did for a fan...pretty fun, I must admit. Bikinis in space...doesn't seem all that practical, but it makes a killer image! Mark, if you're reading, your artwork is on the way!

By the by, if you'd like to get a commission like this of your very own, email me with the details of your request...I'll give you an estimate of how long it'll take, charge you a measly 75 bucks, and we'll get it started!

Crooks and Liars (and Fascists, apparently!)

I couldn't let this image I created for Seattle's The Stranger go unseen by the masses. It's so seldom I get to illustrate a topic I feel so passionate about. Follow this link for David Goldstein's thoughtful and sadly appropriate essay on Bush's domestic spying program. 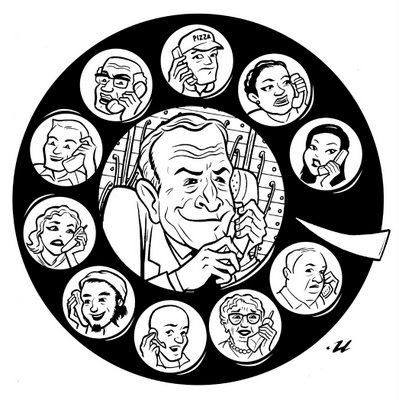 Posted by Robert Ullman at 9:41 AM 2 comments

So, SPACE...it was a kinda kooky year for me. I drove up from Virginia through a downpour on Thursday afternoon...hung out with the parents and my brother in Kent on Friday, and headed down to Columbus Saturday morning with Lurid Pal Galen Showman (BTW, it was still raining). The new SPACE-space was pretty impressive, undoubtably the best yet, at least in terms of convenience and location. I was tucked into what I thought would be an impressive little corner, with Joey Manley, Josh Cotter and J. Chris Campbell on either side of my table...but it was also a dark corner, and I think it resulted in making us kinda invisible. It's a nice room, though, and if they can just bump up the wattage on the lights a bit, I think it'll be a good location.

Sales-wise, a schizo day...dead for the first hour and a half, nuts and busy for the next three, then dead for the rest of the day...seriously, I don't think I sold a goddamn thing after 4:00, and the show didn't end til 6. It was kinda disappointing, actually...I just don't know why this show isn't more successful. I'd probably stop going if I hadn't been there all seven years (you hate to break a streak) and it wasn't so convenient to bundle it up for a trip up to visit the folks and friends.

I made a distinct effort to get out from behind the table and check out some other creators' stuff, something I've had trouble doing recently at shows where there's no one to mind my store while I'm meandering about. Met some cool new folks and picked up some interesting books...honestly, I haven't read much yet, but I'll try to remember to post when I do...or at least send out some emails. I especailly enjoyed meeting or re-meeting a couple of the Luird F.O.O.L.s from my message board, Matt and John. It's about time!

After the show, it was still raining. Galen and I drove over to nearby PF Chang's (which I'd been craving all day since hatching the plan to have dinner there around noon), only to find it choked with gussied-up teens waiting to have dinner there before the prom. The hostess told me to come back in two hours to pick up a pager, so we could wait another hour and a half for a table. Fuck that. We met up with J. Chris, Rob Venditti, Andy Runton and his friend Shana, gave 'em the bad news, and walked to an Irish pub next door, which was teen-free. It was pretty good...beers, fish-n-chips, and great company (including Rob and I swapping Borders employee stories from the mid-90s, when that store was a great place to work)...but I really had a taste for some orange peel beef.

The pics I took were really nothing special, so here are a few links to people who know how to use a camera better'n I do.

Jeff Manley (My neighbor at the show and an all-around hilarious guy. He ate an entire stick of butter on a dare!)

Mike Dembicki
Posted by Robert Ullman at 10:42 AM 2 comments

I'll be appearing this weekend at the Small Press And Comics Expo at the Alladin Shrine Complex in beautiful Columbus, Ohio. I'll be sharing a table with Lurid Pal Jay Geldhof and selling all the new books. I'm driving to the show, which means I'll also be bringing along a sh'load of original art! There'll also be a bunch of other great guests at SPACE, including J Chris Campbell, Josh Cotter, Alex Robinson, Mike Dawson, Rob Venditti, Andy Runton, and ('natch) many many more! If you're in town, stop by, won't you?
Posted by Robert Ullman at 11:46 AM 3 comments