The Aughts Have It 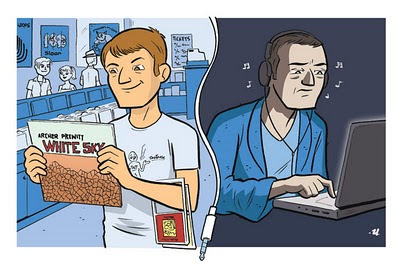 I created the image above for The Stranger's end-of-the-decade issue...specifically, about regrettable developments in music over the last ten years. The illo focuses on the death of browsing...going into a cool record shop and checking out different records versus sampling tracks online in the solitude of your home (in this case, in your bathrobe). I can't say I'm not guilty of this very thing...at some point, thanks both to the cheapness of eMusic.com and my never-ending battle against additional clutter in my house, I began buying 80% of my music digitally.

If there was a big change in my musical routine, that was it, as the types of music I listen to tended to pretty much stay the same. The same most definitely could not be said for the previous decade...back in 1990 when I was a senior in high school, I occasionally still listened to Def Leppard and Whitesnake, God help me!

Anyway, just for kicks, here's a list I made of my 20 favorite records of The Aughts. By no means meant to be a high-falutin' critical assessment (or in order), but just to recognize some of the amazing tunes that have provided the soundtrack for the last ten years of my life.

1. The Dismemberment Plan - Change
Not long after this came out in 2002 the Plan broke up for good. I didn't make it to nearly as many shows this decade as I did in the previous one, but I am SO glad I got to see these guys a couple times. Just a blast.

3. Ken Stringfellow - Soft Commands
If only for one song "When U Find Someone", which posits GWB as Saddam Hussein's biggest stalker. Utterly hilarious. The rest of the record is a beautiful gem of a.m. radio gold.

4. Tortoise - Beacons of Ancestorship
I had a hard time deciding between this and 2001's Standards...but I give Beacons the nod because I think it'll prove to be as classic. Also, there really isn't anything else released in the last couple years on my list!

5. Elliott Smith - Figure 8
Beautiful songs and arrangements...I loved hearing what Smith could do with all those musical tools at his disposal. Then just like that, he was gone.

6. Pernice Brothers - The World Won't End
From first to fifth, the strongest lineup since the '75 Reds. Unbeatable.

7. Death Cab for Cutie - We Have The Facts and We're Voting Yes"
Bogs down at the end with a few plodding tracks (always a problem for DCFC), but really sounded fresh when I first heard it back in spring of 2000. They get slagged a lot, but I think they've done some amazing work this decade, and I still enjoy 'em. Besides, anyone over the age of 15 who uses the term "sellout" with any degree of seriousness is an idiot.

8. The Shins - Chutes Too Narrow
This one didn't leave the CD player in my car for about a month...just played it over and over and over.

9. Destroyer - Destroyer's Rubies
As much as I like Dan Bejar's contributions to the New Pornographers, his solo stuff never really caught on with me until this record, which I adore!

10. Sufjan Stevens - Illinoise
"Casimir Pulaski Day" has always made me tear up...now that I have a daughter, it practically make me sob.

11. Sloan - Never Hear the End of It
This might be my overall favorite. I love it so much that I almost can't even think of what to say about it!

12. Apples in Stereo - New Magnetic Wonder
I loved these guys' earlier tunes, but I always kinda considered 'em a novelty act. Wasn't prepared for what a serious and magical record this would be, but it is. It's also notable as being able to survive having two of it's songs ("Energy" for Pepsi and "Sun is Out" for...Dodge, maybe, in the 2008 NHL playoffs?) way overplayed in commercials without my getting completely tired of 'em.

13. Fountains of Wayne - Welcome Interstate Managers
I wanted to pick 2007's Traffic and Weather for this list, just because it was so critically and unfairly maligned. But Managers gets the nod, with FoW at the top of their game.

14. Broken Social Scene - You Forgot It In People
One of several Pitchfork recommendations that I really ended up liking...purchased in NYC at Other Music too, just to add to my indie cachet.

15. Arcade Fire - Funeral
Revered, but deserving...defines epic. Can you listen to the first minute of "Wake Up" and not want to stand up and fly?

16. Interpol - Turn on the Bright Lights What can you say about Interpol? You either like 'em or you don't. Put me in the yes column.

17. They Might Be Giants - Here Come the 123s I wish kids' records had been this good when I was one. Evie loved this thing all summer, and we probably heard it three times a day. Never got sick of it...in fact, half the time it was my idea to play it! You don't have to have little ones to enjoy this stuff!

18. Yo La Tengo - I Am Not Afraid of You and I Will KIck Your Ass By the time 2006 rolled around, I thought I had YLT figured out...mellow and atmospheric, I liked 'em a lot. But I was totally not prepared for how catchy and upbeat this record turned out to be. "Mr. Tough" was my ringtone for a good six months,

19. Sam Prekop - Sam Prekop Okay, it actually came out in 1999, but I didn;t get my hands on it til 2000. This is one of the most perfect records I've ever heard...my pal Craig kinda oversold it to me in his initial recommendation, but it lived up to the hype...since then, I've oversold it to others who've dug it as well. So SEEK IT OUT...you won't be sorry.

20. Archer Prewitt - Three Maybe the only "grower" on this list...It took me about a year to really get into it. Worth the effort.
Posted by Robert Ullman at 9:07 PM 4 comments

It Is Decidedly So

Shyster "fortune-tellers", for the Las Vegas Weekly. It's an odd observation, but I've noticed that there's often a lot of purple in the illos I do for these fine folks. No idea why! 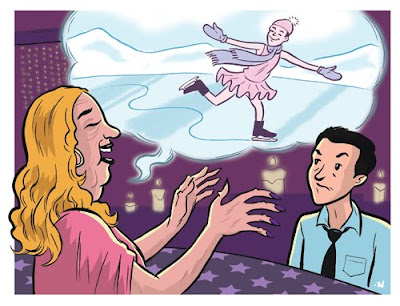 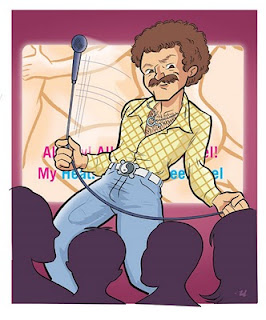 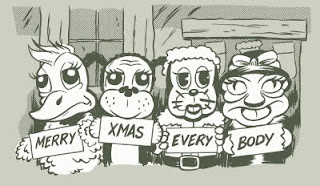 If it's the end of the week, I must be all worked up about something ridiculous! 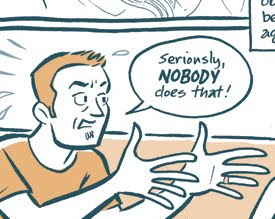 My good pal Todd, a designer in Atlanta, recently had the logo he created for the Fort Wayne TinCaps baseball team chosen as the Baseball Digest logo of the year. A fine honor, and well-deserved! Bravo, pal!

If only Todd's firm had been chosen to create the identity for Richmond's new baseball team, the Flying Squirrels, who debuted their set this week! While I wouldn't say I hate it, I'm not too excited about it either...but that's a story for another day.

Anyway, I thought I'd take this chance to post a pin-up I did last spring featuring a TinCaps jersey! Enjoy! 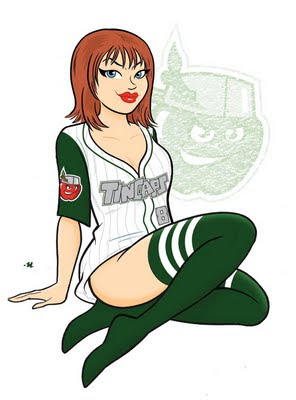 Okay, so I got busy and kinda missed the traditional kick-off to the Christmas season, but I didn't want any more time to pass before making a special offer of my own to my beloved readers.

If you ordered a copy of Atom-Bomb Bikini: The Lurid Art of Robert Ullman over the course of the year, it no doubt occurred to you as you were thumbing through its pages that lots of your friends would like to own their own copy. So from now until the end of December, when you order a copy of the book as a gift for a friend (using the handy button on the right side of the page), you'll get a couple full-color Atom-Bomb Bikini holiday cards to give along with it (or keep for yourself)! I'll be going all Fezziwig on you, throwing in free stickers and so forth as well. Finally, you can do your shopping and put the "X" back in "Xmas" at the same time! God Bless Us, Every One! 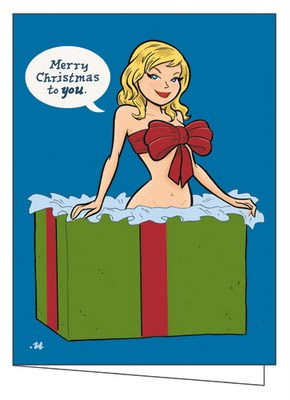 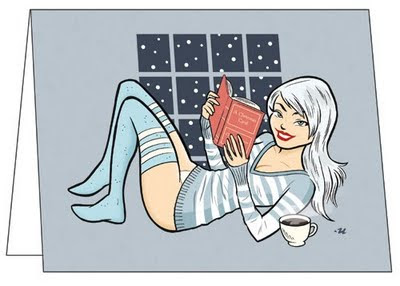 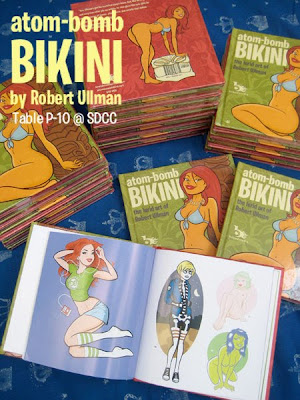 I provided the cover for the most recent issue of the Washington City Paper, examining the differences between the stereotypical readers of each of the city's gay newspapers: The younger, hipper readers of the Metro Weeklyvs. the older, mellower readers of the Washington Blade. I provided the two full figures pictured below, and left putting all the pieces together in the able hands of A.D. Brooke Hatfield, who did a bang-up job! 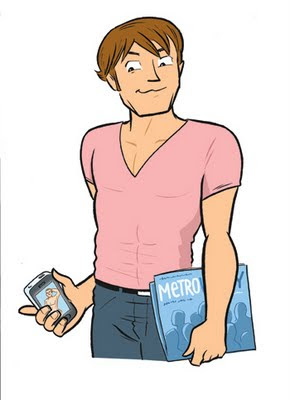 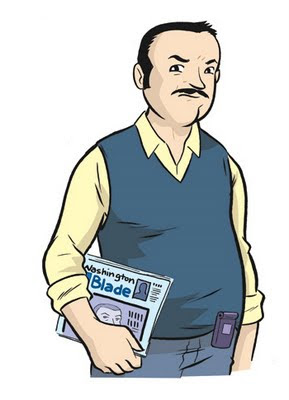 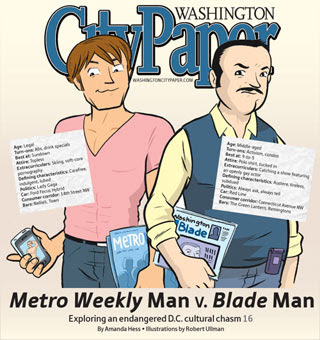