Another comic from the vaults today...my story from the long out-of-print Project: Telstar from AdHouse Books, an astounding anthology if ever there was one. The theme was space and robots, and the talent sandwiched between those two gorgeous Dave Cooper covers (remember when he did comics? Yeah, me too. *sigh*) was truly a thing to behold.
My strip was actually a collaboration with a few of my pals, with as many of us contributing as there were pages in the story. It was written by Bill Burg and Galen Showman, I handled the art, and Eric Gordon helped out with the color.
Looking back, I'm still pretty happy with how it looks, a little looser and less labored than the rest of the comics I was doing at the time, mid-2003 or so. Not to say there aren't some cringeworthy moments...especially Allison's face at the bottom of page 3. UGH!
This was the first of three books I'd work on at AdHouse (followed by the CHEESE! sketchbook with Jay Geldhof and the superhero-centric sequel to Telstar, Project: Superior), all of which completely sold out! I'm not sayin', I'm just sayin'... 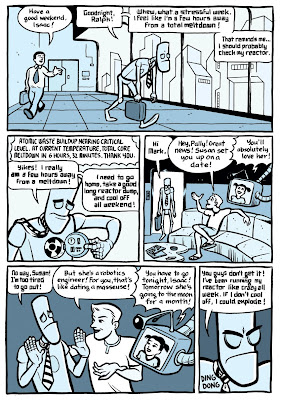 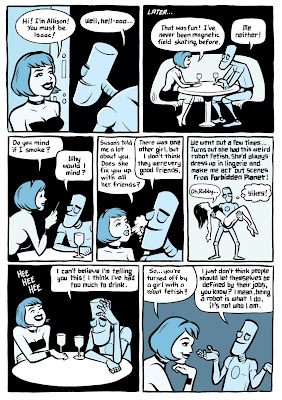 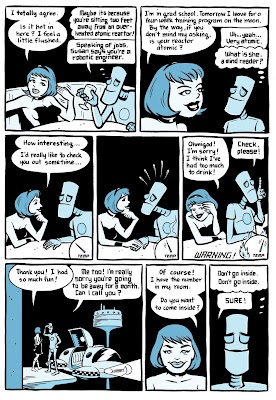 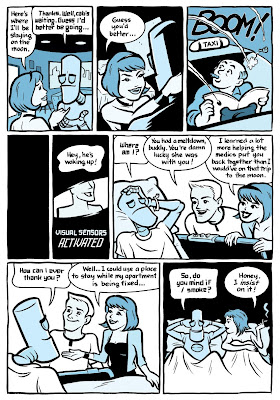 Thanks for posting. That was a lot of fun. Good story and great art!

I always loved the tie! And the colors look great on a monitor!

I always dug this story and it saddens me that people would lose a page of it when they ripped my story out of the book...