This week, I finally took care of one of the projects I've been putting off since we bought this house back in 2004: the brick patio!

A little background: The southeast corner of our house has pretty much been a dusty disaster area ever since we moved in. It doesn't get much sun, so grass won't grow, and when it rains, the uneven dirt causes deep, muddy pools to form almost immediately. I addressed this to some extent last spring by building a long trench and drainage system, which has worked admirably, but there was still the matter of all that messy unused space. We've wanted to build a patio there since day one, but A. It's expensive, and B. Until the drainage issues were worked out, there was no point in even bothering, since any work we did would most likely be undone during the first big storm. Even still, I'm paranoid that the first heavy rain we have is going to result in a backyard full of bricks and paver sand!

Anyhow, here's a look at some pics...the size of the patio is almost-nine by sixteen feet, which is a pretty ridiculous size to embark upon, especially when you don't know what you're doing. I bought all the supplies at Lowe's (all $800 worth of 'em) and had them delivered, which is a pretty convenient way to go and well worth the sixty bucks it cost me.

Here's the hole I dug with a good bit of help from my friends Greg and Eric...this was really the worst part, I hate me some digging. I've got the huge wood frame in place in this pic, and it's about half-full of gravelly paver base. 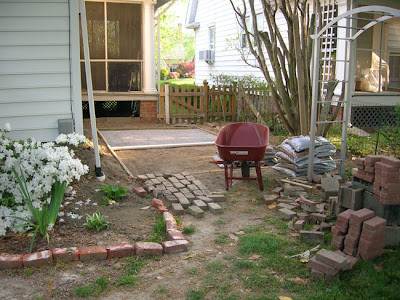 Full of the paver base, to a depth of about 3 inches: 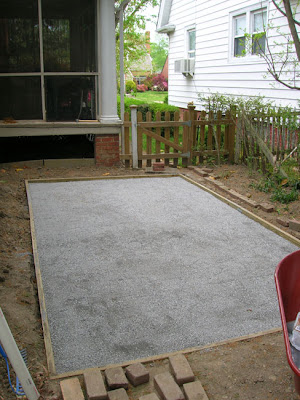 Next up is about an inch of sand, tamped down and packed all tight: 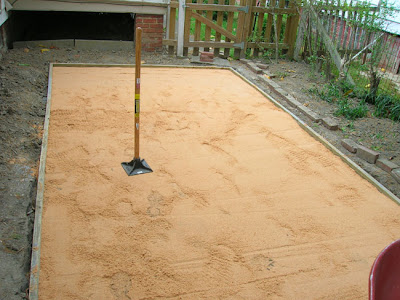 Finally, it was time to start laying the bricks. Each row across was 26 bricks, and there were 23 rows total. This is about a third of the way there: 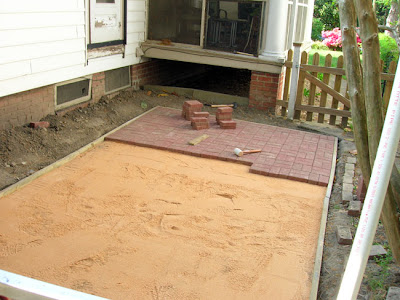 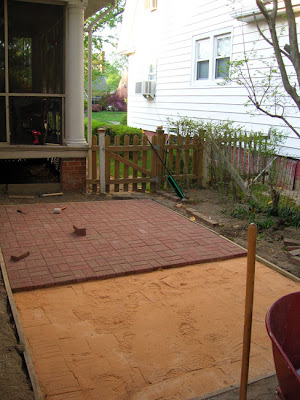 This worksite has gone 163 0 days without an accident. 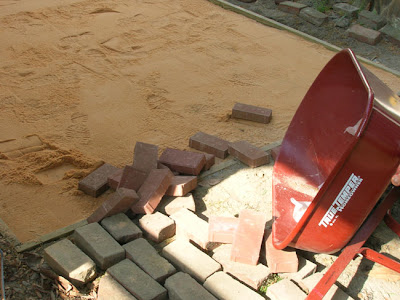 Here's another shot of it halfway done...it looks more impressive from this angle. As you can see, I'm beginning to run out of daylight at this point...it was about six, and I'd been out since nine. If I was gonna finish before the end of the day, I was gonna need some help, so I called Eric to see if he'd come by and wheelbarrow the bricks the thirty feet from my driveway to the worksite. 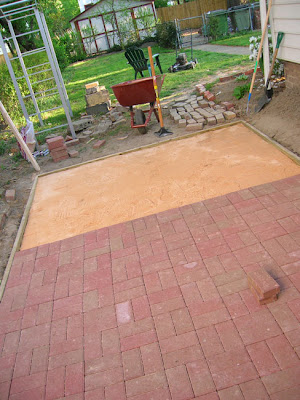 The ever-dwindling pallet of supplies: 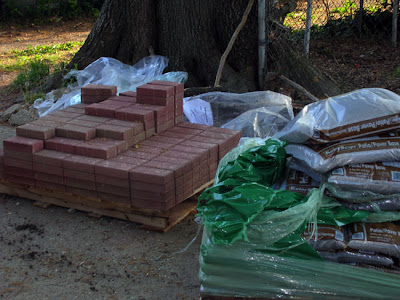 Finally, the last brick. This was a big deal, 'cause somehow, despite my general incompetence, I'd managed to measure the distance from the front to the back of the patio, all 176 5/8 inches of it, pretty much exactly right, with less than an eighth of an inch to spare. It had been weighing on my mind all day, worrying that I'd get to the end and the last row of bricks wouldn't fit and I'd be screwed. Hooray for accurate tape measures! 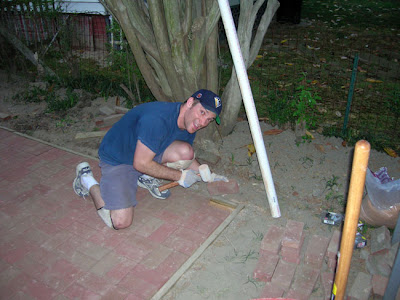 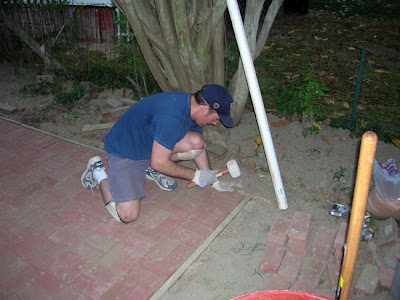 All that was left was to sweep some sand around the surface, filling the cracks. I don't have any good pics of us "enjoying" the thing yet, 'cause we really haven't had the chance! And alas, I really wish there was some way to have worked a beer shelf into the equation. Ah well...maybe next weekend! 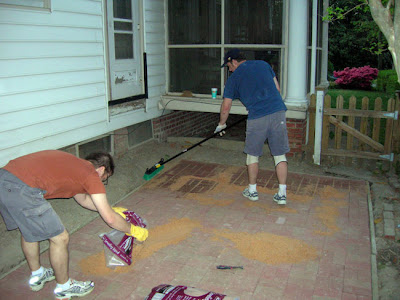 Posted by Robert Ullman at 5:44 PM

Jay = impressed!
Nice job there, Chaps, looks sweet!
Are ya gonna build some steps from that back door?

Thanks...it's great to hear praise from the deckmaster himself!

Steps? Ugh, I dunno. I'd really just like to get rid of that door entirely and change it into a window. If I could put steps anywhere, I'd probably rather have them coming down from the screened porch there in the background. It's still a pretty ugly area, and there's a lot to do yet...putting in the bricks is just the beginning!

nice work, chappy. but why didn't you just call HGTV and have one of their reality show crews come do it for you?