As much as I might like to think that a return to Montreal to play his old team will get in Jose Theodore's head and cause him to lose his shit, there's no way the Capitals don't win this series. The Habs are going nowhere...if the season lasted another week, their spot in the playoffs would no doubt be claimed by the Rangers. Besides, an early Caps exit would deny the world another Washington/Pittsburgh playoff matchup and an eighth Penguins victory. No way Gary Bettman is letting that happen. Capitals in five. 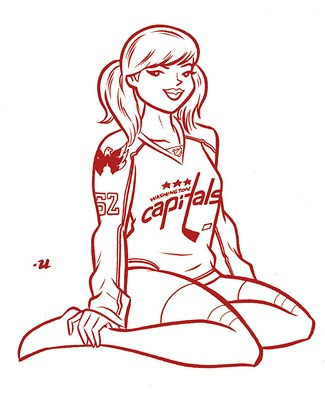 This one seems like a no-brainer until you consider that the Devils, despite their fine record, managed only one win in six tries against the Flyers this year. For whatever reason, Philly has had New Jersey's number. I think that changes in this series. Best Goalie Of All Time or not, Martin Brodeur has been outplayed, frankly, in the playoffs the last couple years. However, I simply can't believe that Brian Boucher will be able to duplicate the success that Henrik Lundqvist and Cam Ward had in 2008 and 2009. It'll be a long, tough series, but it'll ultimately be a win for the Devils in seven. 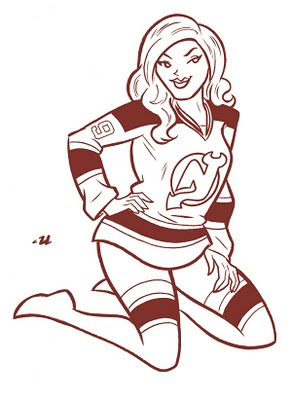 U.S. Olympic hero Ryan Miller and the Sabres against a Boston team who've been fighting just to cling to a playoff spot the last two months. The Sabres have quietly put together a very impressive season, and may well prove to be the ultimate fly in the ointment for some unlucky Eastern Conference team before it's all said and done. Boston has struggled all season to score goals, so unless Miller has an epic meltdown, this one oughta be over quick. Sabres in five. 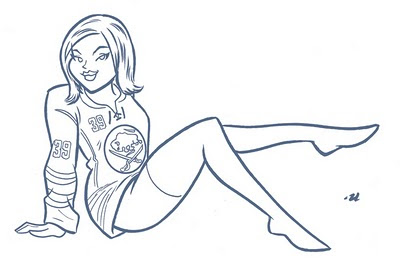 These guys again? This'll be the third time the Pens and Sens have faced off in the first round in the last four years. The overall score stands at 1-1, and though neither of those series was close, this one definitely promises to be. Both teams have been up and down all season: The Senators have had long losing and winning streaks, while the Penguins have been in win two, lose one, win two, lose one mode since the beginning of December. If I'm being perfectly honest with you, I'll admit that playing the Sens in the first round scares the shit outta me...in fact, logic almost dictates that I pick them to win it. But, with all the thrills and joy the Pens have provided over the past two seasons, there's no way I'm giving up on them now...So, in the words of Bud Brigman, "FUCK LOGIC!" Penguins in six. 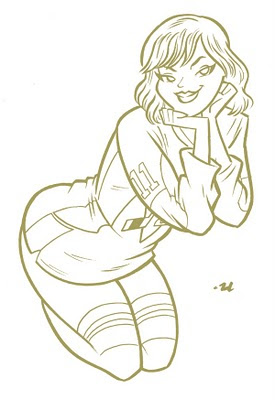 CRASS COMMERCIALISM DEPT: All of the original, hand-drawn art for the Stanley Cup pinup girls is available at my Etsy store...and if you'd like to go the extra mile and get a personalized, one-of-a-kind uni-girl illustration of your very own to your exact specifications, that information can be found here.
Posted by Robert Ullman at 4:17 PM

I respect that no matter how much you dislike our Caps...you never short-change us with the hair-lipped fattie sweater girl.

Now, see, this makes it even worse that the Flames didn't make the playoffs this year...no hope of an Ullman Flames Sweater Girl!

PS Are you doing the playoff beard thing? I did it 2 years ago but not last year, so I gotta go no beard this year.

Strugg: Haven't done a playoff beard yet (unless I was playing)...but this is the year I do! I'm gonna be mighty scratchy by June.

Johnny: Always hate to see the Flames not make it. Such a great sweater.

Dan: I try to be fair. I warn you, though...if the Caps win it all, you're getting a pantsless Boudreau sporting something from the Alyssa Milano collection.

If Vancouver wins it, she wants a new piece done with her & the Cup...

She loved your Penguins Cup piece last year and wants a new one soon (that's why we've been holding off...that + we just saw the new Penxa's...did you get one of those?)

ps: once again, all your girls are beyond words!!

Thanks, Peter! Thought of you guys when I picked the Kings over the Canucks...but I just had a feeling about LA. I've been wrong about everything so far, so that bodes well for ya!

The Chicago Blackhawks are the worst franchise in NHL history. Their fans are nothing more than bandwaggoners, they have the two WORST goalies in the history of hockey, their best players are too young and stupid to be captains, the owners are a bunch of cheapskates and they have the ugliest, shittest uniforms in all of Hockey.

I wish everyone associated with the Blackhawks would kill themselves. Fucking Chicago SCUMBAGS Like that Nigger Obama and that far irish Gangster Mayor Daley.

St. louis should be in the playoffs. Fuck Chicago. How come you dont draw any Cardinals, Blues, or Rams girls. Oh thats right you are from Pittsburgh, you cant even find St. Louis on a map but then again East Coast pieces of shit like you cant think beyond the east fucking coast like ESPN.

Is this a joke? Can a human being really be this gutless and stupid?

Seriously, just delete that comment. It doesn't deserve to see the light of anyone's computer screen.

No don't delete it. It's nice to have a reminder every once in a while of people's stupidity. I think, outside of the remarks towards Mr Ullman, its hilarious!
"St. louis should be in the playoffs." This isn't boxing pal. You actually have to be good to get a shot at the title. And no offense there towards St. Louis, cuz i love the Blues.

Damn, I would have bought the Sabres print but you put the wrong number on it. Miller only wore 39 in the Olympics. He's actually #30.

@289: Yeah, I realized that after I was done inking the piece...when Olympic fever turns tragic! I'll have to go in there with some white paint and fix it...