TONS of stuff going on this week...release of the Jetta book, Stanley Cup previews and FLUKE on Saturday...but I thought I'd start things off with another Legion piece.

It's Lydda Jath, better known as Night Girl! Her power is super strength, but it only works at night...or at least when it's dark, as it is 24/7 on her home planet of Kathoon. You'd think a gal from a planet where it's always night would be a little more goth.

Actually, my first draft of this illo had Night Girl in the ridiculously skimpy outfit she wore when Mike Grell was drawing the Legion...I'm generally a fan of his revealing, if completely impractical Legionnaire costume designs. But as I went to ink, I realized there just wasn't enough to work with, so I switched to the Giffen/Mahlstedt-era version, which makes up for in character what it lacks in skin. 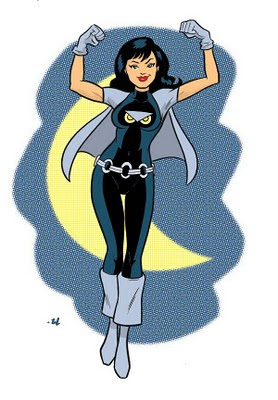 I'm not familiar with the Grell design, tho I've seen others - very kinky stuff. I used to think Ty Templeton did the definitive Night Girl, but you've definitely edged him out of the top spot.

Templeton? Where was that? I love his work!

Secret Origins, issue 37, February, 1989. IMHO, as good as Giffen is and was, Ty Templeton did the definitive Legion of Substitute Heroes story. If you like the Giffen/DeMatteis/Macguire JLI ethic, Templeton takes it to a whole new level.

I gotta look that up!