Some S--- I'm FAR Too Busy to be Messing With

My local shop, the great Velocity Comics, holds drawing contests every few months, the prize a gift certificate to the store. There's always a theme...draw your favorite Avenger, draw Wolverine fighting somebody...this time around, the theme was WATCHMEN. I came up with a pretty fun idea right outta the gate, but it took me awhile to find the time to put brush to board...if you wanna know the truth, I still don't have the time...but it was really too good to pass up. And what's the comics biz if you can't go nuts and have some fun once in a while?

It's a parody of the cover of FLASH COMICS #92 (by, I believe, Joe Kubert), with Nite-Owl, Captain Metropolis and the Silk Spectre of the MinuteMen standing in for Hawkman, Flash and Black Canary. One of the things I really dug about WATCHMEN was the flashbacks to the first generation of heroes...the simpler times (on the surface, anyway) they enjoyed before the world went to hell. I imagine this as being a relic of that era. 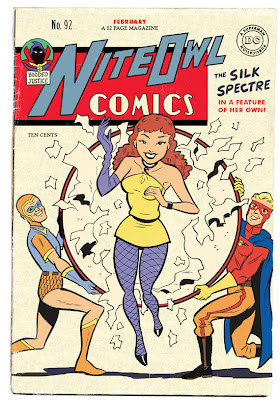 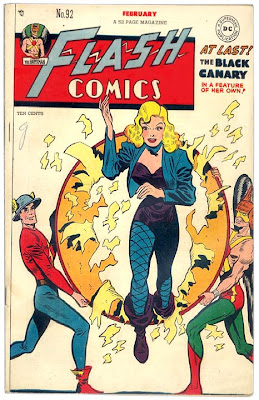 Very cool, Rob. All the recent hubbub about the Watchmen movie has forced me to get out my copy of Ultimate Watchmen and start re-reading the monster. :)

(Some may argue this is the only way I ever grin, but the point is this drawing fills me with delight.)

Great concept, Rob. Hope you get the prize. Yours is a much happier Watchmen.

I'm impressed with your post-a-day, btw. That's not easy to keep up.

Hi I'm curating an art show that focuses on comic art. Would you like to show and maybe sell a few pieces. Call me.