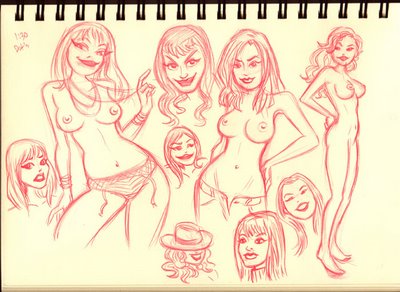 Posted by Robert Ullman at 5:31 PM

*reads Ullman's profile*
"Supermodel"? Why does that ring a bell? Is it going to be simular to the Victoria Secret Service comic?

One more thing....do you do requests?

That depends on the request, I guess!

Actually, Antonio, if there' something or some character you'd like to see on the blog, let me know and I'll see what I can do.

And as far as SUPERMODEL goes...it's actually nothing like the Victoria's Secret Service comic, more of a slice-of-life fiction short graphic novel type of deal...but I promise to throw in some gratuitous nudity if the situation ppresents itself!

"That depends on the request, I guess!

Actually, Antonio, if there' something or some character you'd like to see on the blog, let me know and I'll see what I can do."
Well this is really just for a personal favor.

Have you ever heard of a game called "The Legend of Zelda"? If you haven't it's a series of games involving a hero (clad in green clothing) that goes out and saves the Princess and her Kingdom, Hyrule. Anywho, there's this magical sword (think of it like the mythical "Excalibur") called the "Master Sword". And I've had this vivid dream (yeah, its sad. I dream about video games. No wonder why I want to become a computer designer for Nintendo...) that shows the statues of the heros of the past, weilding their swords above the Master Sword that's embedded in it's pedistal. And there's the next hero (face isn't shown) standing near the pedistal, about to unsheith it like the heros of yor did.

Now I did a sketch (very rough sketch)of what I imagined it to look like.
http://img.photobucket.com/albums/v146/BigGoronSword/One%20Shots/ZeldaDream.jpg

And now, from left to right, the statues should look like these heros:

Now I know all four heros are drawn differently, but I think it's possible to draw them so they are of the simular art style (yours) but make them recognizable.

The reason the statues' pedistals get higher and higher, it's because the heros range from height (and age). So I wanted all four swords to come together (where the light is coming from) evenly.

I know this is a really big request to ask for. I have the ideas, but my fingers won't listen. I need an artist that can draw my dream. If coloring is an issue, don't worry, I'm sure I can find a colorist. But I'm hoping that you can fulfill this request (as for the backround, all I can think of is to have it look like the inside of a castle with big stained glass windows).

Now if you are going to ask where I got this dream/idea from, it's from one of the games. In The Wind Waker (the fourth hero I showed you) there is a part where these knights raise their swords above the hero as he unsheiths the Master Sword from the ground. That and there was a statue of the previous hero before him (hero #2)
http://www.zeldauniverse.net/gallery/displayimage.php?album=1&pos=35

Would you take this Zelda-fan's request? If not drawing/coloring, then just sketching? Please *puppy dog eyes*

...maybe even have a sheild on their right hand...it wasn't in my dream, but it's a nice idea. What am I saying? I'm asking too much already.

Dude ... that's not a request, that's called a "commission".
If it takes more than 5 words to describe it, and 2 of them aren't "bikini clad", I'd say it's going to take more than puppy dog eyes.

Yikes, Marco...I thought you were just going to say "Marvel Girl" or "Scarlet Witch" or something...I'm afraid Paul's on the money, anything that specific falls under the commission category, as in "If I can't sketch it in under ten minutes, I'm gonna have to charge ya for it!" Sorry, man!

Don't feel too bad about dreaming about video games...years ago, when I was working on a longish story in one of my first mini-comics, I stayed up really late for about six days in a row, trying to finish it up (it took forever 'cause I had no idea what I was doing!). Every night, once I'd stopped working but was still too keyed up to go right to bed (usually around 4 a.m.), I'd play a few games of DigDug on this old Atari system from the early 80s that a friend of mine had set up in the house. I ended up having these vivid dreams about DigDug for weeks!

But if it's a 10-15 minute request you're taking, I'd take a Bikini Clad Marvel Girl, Storm, Psylock, or Emma Frost anyday. My money is on Psylock or Storm.

Apparently our friend "Anonymous" hasn't spent much time on the internet. Nor much time attempting to draw female bodies or faces, because then he/she'd know how helpful it is to see these forms.

Yeah, "anonymous" tends to be a sloppy reader!