Boy, really not into this today. Whatever.

Boy, what a scary first series that turned out to be for the Canucks, eh? With a 3-0 stranglehold on the series, Vancouver almost choked away the whole magilla, needing overtime in game seven to finally eliminate the resilient Blackhawks in one of the most exciting hockey games I've ever seen.

The question now is, how will that long, emotional series affect the Canucks in round two vs. a Nashville team that bested Anaheim in a six game series that, despite some tight moments, had nothing in comparison to Chicago/Vancouver. It was Nashville's first ever series victory, and they're sure to be bouyed the belief that, finally, they CAN win. (I might have more insightful analyisis if I'd been able to watch even one goddamn minute of it on TV.

While my heart wants to pick the Preds, my head says go with the 'Nucks. Whatever, as long as one of them beats the Red Wings. Canucks in six. 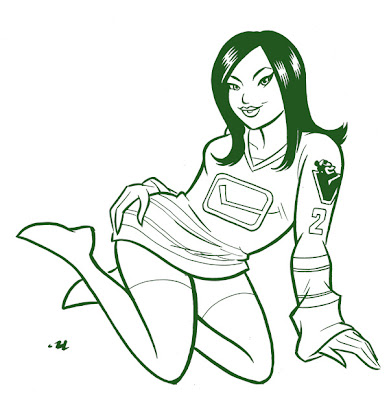 I hate the Red Wings. I was really hoping for Chicago to win, so that Wings would have to face Nashville, who I still believe are due for a franchise-defining victory over Detroit. Ah well, maybe in the next round, 'cause the Sharks are sure to lay an egg. Bah. Wings in six.

Posted by Robert Ullman at 5:46 PM

At least your hatred for the Wings doesn't spill over into drawing a far less attractive chick in red jersey. Though that would be funny.

The next time I see a detroit cunt im gonna rape her.

Fucking white trash hillbillies trying to take over chicago. Go back to michigan and take your douchbag red wings fans with you.

Oh and Vancouver... I just wish a terrorist attack would fall on them. I hate Canadians.

Hey Anon, c'mon...you know you love us. Love how we come up from behind and take you. Gently or rough? You decide. Yeah, you like that, dontcha? Shush. Yeeeaaah...

This is probably the same butthole who came around decrying my "anti-chicago, east coast, shittsburg" bias, ignoring the fact that I've never had a bad word to say about the Hawks or the city. As I did then, I'm gonna leave it up here as a testament to how an utter lack of perspective can reveal you as a drooling imbecile.

I'm rather disappointed that he used the proper form of the word "your". I at least expected "you're" from someone who can't use proper calitalization or spell douchebag correctly, even if they are texting while driving.