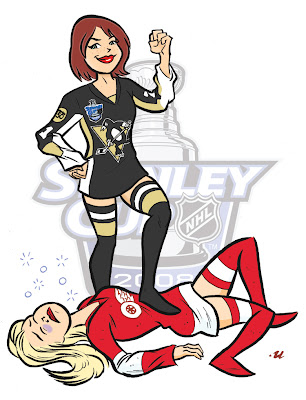 'Course, Penguins in four'd be fine with me too.
Posted by Robert Ullman at 8:36 PM

Poor talented, yet deluded Rob. The Wings will win it.

Let's Go Pens! 'Guin Girl is rocking the Geno jersey, eh? This should be a great series. I'm right with your prediction, Rob, having described the same scenario to a co-worker this morning.

I found your artwork recently via uniwatchblog.com, even downloaded the Red Wings-Stars "hockey hotties" as my wallpaper for the Western Finals. Didn't realize you were a Pens fan tho! Would love to see a reversal of the Pens-Wings hotties but I know that ain't gonna happen. Anyway, love the art.

If the wings win, I would love to see a reversal and maybe a hottie skating around with the stanley cup. Keep up the good work.

"If the wings win, I would love to see a reversal and maybe a hottie skating around with the stanley cup. Keep up the good work."

I wouldn't hold my breath for that. But I appreciate the compliment!

I take back what I said about the Red Wings being a classy organization. Or at least, their old-ass piece a' shit goalie, Chris "Academy Award" Osgood. The way he flopped around like a tuna every time so,eone came near him was embarrassing. Have some respect for the game, jagoff. Worse yet is that when I lose the bet, that's the jersey I'm gonna have to wear all day. I wonder if Jeff will mind if I replace the nameplate on the back to read "DIVER".

If I had it to do over, I'd've invited both Osgood and Ron Stewart to my Memorial Day barbecue. Look it up.

I found your blog through EmptyNetters and was surprised to see the picture with this blog post because the Pens girl looks a lot like me (at least, my friends said so)! Your illustrations are super awesome...I love your style.

GO PENGUINS!!! DO IT IN SEVEN!