Sussa Paka of 30th century Earth has the power to use her indestructible and malleable hair as weapon. Taking the name Spider Girl, she applied for Legion membership but was rejected on the grounds that her power was lame. She instead became a founding member of the Legion of Super-Villains. She would later become a hero and Legionnaire after the Dominators' takeover of the Earth, but that was at least a couple reboots ago. I think she's a bad guy again now. 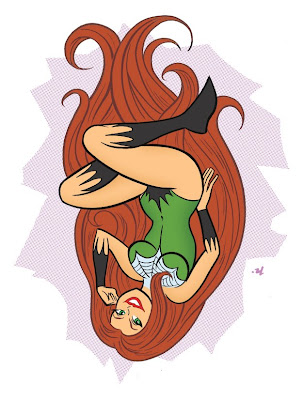 Posted by Robert Ullman at 1:28 PM

great drawing. So which character is a rip-off, this one, or Medusa from the Inhumans?

I love it. Odd how Bouncing Boy and Shrinking Violet make the cut, but not Spider-girl.

wow!! i love it!!!!!! i was doing research for my own spidergirl illustration and stumbled on your work... pure loveliness!