More Legion! This one's kind of an oddball...Laurel Kent was a descendant of Clark Kent, and wore (near as I could tell) nothing but a poncho with the Superman emblem on it as a student at the Legion Academy. A few years later, the powers-that-be at DC needed a Legion character to tie in to their awful Millenium crossover event, and it was revealed that Laurel Kent had been a killer Manhunter robot in disguise all along! She blew herself up or something stupid, never to be heard from again. 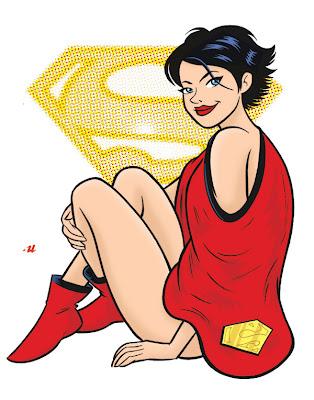 Was never a Legion follower growing up, but man, that whole poncho thing is hard to forget. Should give the Great Darkness saga a try, but unfortunately the whole twist ending (it was Darkseid!) was spoiled by spoilers a long time ago.

Problem with reading Legion is, I think you kinda have to discover it when you're young and have tons of time to read lots of comics...rather than any "classic stories", the fun comes from reading issue after issue of continuity...least it did for me. It's like a dang soap opera!

I hated that they made Laurel into a Manhunter robot due to editorial fiat. It was weak.