In less than an hour, the football season kicks off with the Titans at the Steelers. It's been three long months since I watched a sporting event that meant anything (at least to me). It's been a nice little break...but I've missed getting all disproportionally worked up about shit that I have no control over whatsoever. So seeya later, fingernails...it was nice knowin' ya! 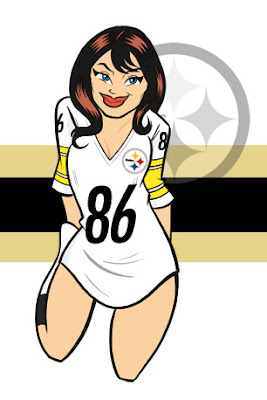 Posted by Robert Ullman at 7:42 PM

Hot chick... but your prediction was a little bit off. Thank goodness football's back (and hockey's right around the corner).

Yeah, I would've LOVED to've done a brand new one...but you know how tight the schedule is!