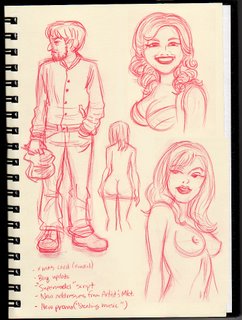 Posted by Robert Ullman at 9:47 PM

Wow! Great work and I love the red, it stands out so well.

It's really lovely to see how you do them.

When I saw you mentioned on BoingBoing I was intrigued because I recently started to illustrate for a weekly sex column too. And I do it pretty much the same way, down to the google search, with the exception that I'm drawing in a very particular style not native to me, but rather pin-up artists from the early part of the 20th century, and in particular, Dan DeCarlo. If you're at all curious, you can see them here: http://www.eye.net/columns/lovebites/
I've only done about the 5 most recent ones though, so before that, there aren't any illos. They're harder to draw because it's someone else's natural style, but waking up for a 9 to 5 job is someone else's natural cycle too.

I was also happy to see you using a blue pencil, which is the finest thing I've come upon in the past 5 years of my comics-drawing life.

Thank you for sharing.

Sully, those are some sharp illos...sort of a cross between DeCarlo and Tomine, almost. Very effective. I'd love to see them bigger.

I love that blue pencil too, but I've just started using the red pencil for sketching, and I think it makes for a cool effect.

Excellent sketches, I'll be sure to head back here. I've never had any formal training, but why use a blue or red pencil for your sketches? I usually wind up using ballpoint pen because it's what I'm most comfortable with...

Traditionally, the blue pencils are used because the blue tone won't show up on photocopies or scans, thus removing the need to erase all the lines underneath an inked drawing before reproduction.

The red pencil? I'm not really sure...I've seen a lot of animators use them, but you'd have to ask them exactly why. I just like the way it looks!

Just for the heck of it, I picked up a blue pencil... wow. It was light enough for me to "find" the lines and define them later without cluttering the image. I'm sold... =)