A post over at Jeff Barak's fine Third String Goalie blog, which showcases a different hockey jersey every day, alerted me to the fact that Bill Barilko's famous, and ultimately kinda tragic, OT goal happened on this day in 1951. The first I ever heard of Barilko was in 1992, in a song by The Tragically Hip...and while today I'd simply Google "Bill Barilko" on my phone, in those days I had to just sit and wonder what they were talking about until years later when I finally learned the whole story in a hockey book while on break at Borders. It was compelling enough that I did a comic about it, a short one-pager which eventually led off the first issue of Old-Timey Hockey Tales. Here it is for your enjoyment! 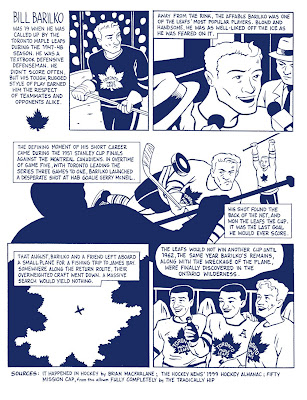 Posted by Robert Ullman at 9:01 AM

Wow. I'm a fairly casual student of hockey history so I wasn't aware of Barilko's story. Tragic. Makes for a great comic, though.

Thanks for sharing Rob. A great comic. I didn't know the story, though.

I loved that comic book. I was never a big hockey fan while I lived in Canada, but reading it made me realize how much of the game I'd picked up through osmosis when I lived there.

Any plans to do anymore hockey comic books?

Working on more hockey comics...it's just a matter of getting them done!

wow! I'm surprised I never heard this story before...really sad...it seems that a lot of hockey history is very team oriented and unless you really delve into in a specific one, stories like these almost get lost...