Even more awesome than Team USA's 2010 Olympic jerseys were the 1960 throwback sweaters they wore for only one game, the win against Canada. They were a tribute to the squad that won gold at Squaw Valley, California, and if not for Sid the Kid's OT heroics for Team Canada, they might've seen lightning strike twice! 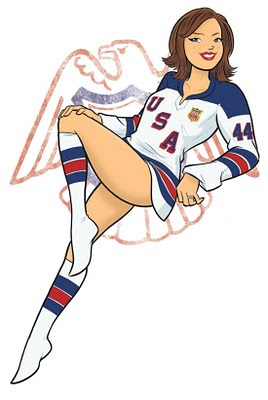 Posted by Robert Ullman at 4:45 PM

definitely like this jersey better than the one for the sticker. the square collar kills me. this girls is a keeper though! very cute.

I'm starting to wish I were a cartoon person...

That jersey brought a patriotic tear to the eye of this (for now, anyway) permanent resident alien.

Keep it up!! (Between you & Penxa, my house is going to be a sports art gallery :)

Damn that Sidney Crosby for his overtime heroics :)

That's a thing of beauty.

I love your illustrations, but I've always wondered at the ubiquitous knee socks. I imagine it's a completely personal preference, but oh! Bare legs are so much sexier!

Regardless, excellent job of the throwback jersey.

Rob, as usual you've outdone yourself-thanks! (I got your package!) Sorry, boys, she's with me...

Catching one liners and specific informative details on hot bikini, beach bikinis, gauze bikinis, metallic bikinis, sexy bikinis, patriotic bikinis et al are available at the website: http://www.squidoo.com/verysexybikini. As you get in touch with this site, it further leads you to an authentic online bikini store where a range of trendy bikinis are sold at affordable rates.

Thoses games were epic. Love the throw back jersey!

That's a great sweater, and it looks so familiar ... it looks just like the sweater an NHL team wears ... the answer to the question: What's red, white, and blue and plays golf in April ...