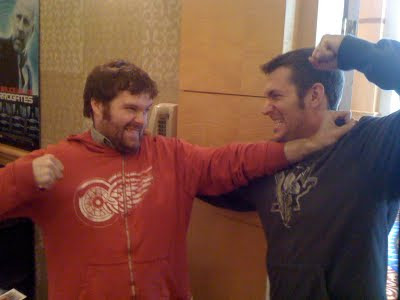 (Jeffrey Brown and I calmly discuss the start of the upcoming NHL Season at SPX 2009.)

It's taken me almost a week to jot down my thoughts about the latest edition of my favorite comics show...mainly because I didn't take any photos to accompany said thoughts, but also because it's hard to think of something new that I haven't said before! It was awesome, as usual...my 12th, if you can believe it! In some ways, SPX has changed a lot...the location is different, and very few of the folks I met at my first show seem to still make the trip...but the vibe and the soul remains the same. SPX has always treated it's guests like royalty...I didn't pay for a drink the entire weekend...and though the faces may change, the good feelings and camaraderie is as strong as ever. It's just a great excuse to begin every fall with a weekend with a couple hundred of your best friends.

The one unfortunate detail? The pissing rain on Saturday night, which put the kibosh on our plans to head down to old Bethesda for dinner. Seriously...everybody knows it doesn't rain at SPX! The fault, however, for watching WANTED on cable before going down for drinks lies solely with me.

Big thanks go to Karen, Jeff, Mark and the rest of the SPX planners for another great show (and about a thousand drink tickets). To Benn and Rachel of Atomic Books in Baltimore for buying a few copies of Atom-Bomb Bikini for their fine establishment. To J Chris Campbell, for breaking his pledge not to come to the show for the third consecutive year. To Dustin Harbin for the free copy of his swanky FULL-COLOR mini-comic, Nutted. A rising star, that one. To Patrick Godfrey, for securing the room, driving up and back and for other timely, uh, suggestions over the course of the weekend (Seriously, get your paws on a copy of Hairyola). To Chris Staros, for the 7&7 and for helping me get all those books back from San Diego. And of course, to everyone who stopped by and bought something at the show. Hopefully you dug it, and I'll see you next year! 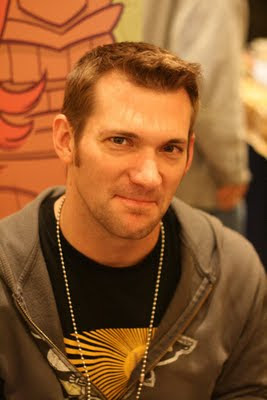 (Maybe the best photo ever taken of me, by Greg McElhatton (who I mistakenly called "Mark" for some reason).)
Posted by Robert Ullman at 9:35 PM

I posted the video that was taken at SPX where you were interviewed by Jodi from across the aisle!

hi im miranda and i accidently clickd on you page and with in secound fell in love. i absolutly LOVE LOVE LOVE your drawings. and thanks to u and a lot of you sketches your, helping me become a better drawer. thank you for that :) would love to contact to you more. so plz email me squeeksaidtheducky@yahoo.