In recognition of today's New Hampshire primary, here's a piece I did for Las Vegas Weekly last year about couples with different political affiliations. What a pain that'd be, eh? 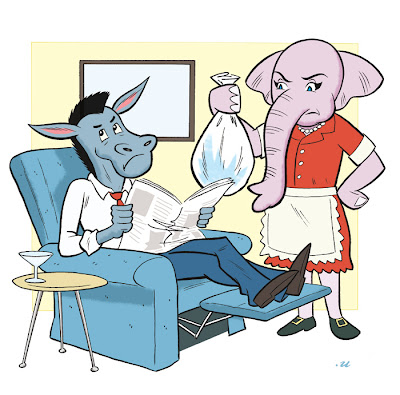 Posted by Robert Ullman at 8:35 PM

Not a big pain. I'm a Republican and all of the women I've dated since college have been varyingly left of center. The last one was a wacko left-radical: "Bush is a facist [sic]", anti-capitalist, anti-globalist, the whole bit. It wasn't a problem for us.

If you're not drafting legislation together, what's the big deal? You just treat each other like human beings, with respect and affection and all that stuff. If you can't do that, agreeing about Bill Clinton won't save you.

I dunno...I've always found it pretty difficult not to be obnoxious about my views!

My wife and I still disagree on things from time to time, but I think the most important thing is to hear the other person out and consider their opinion...failure to do that is where it usually breaks down.

Sometimes I get pissed off that I can get so pissed off about it...I kinda feel like it's all a game to the politicos, whether they're dems or repubs. They're all rich either way, and it behooves them to keep this ridiculous reality show they call politics going. That's why I've decided to focus all my hatred on the New England Patriots instead!