A is for Aardvark

I'm working on a new weekly project, suggested by my pal Ben Towle...The Animal Alphabet! We'll post each Monday on our respective blogs and on the Twitters as well (#AnimalAlphabet)...hopefully some other folks will choose to play along as well! As far as I know, the deal is that we won't announce what we've chosen to draw ahead of time...I'm looking forward to seeing if we have some weeks where we both pick the same animal (it almost happened this week in fact...Alpaca was my second choice!)

Anyway, I'm doing this for two reasons...one, I'm historically pretty lousy at drawing animals...this'll be good practice, and I might actually learn something! And two...boy, it's nice to draw something I can share with my daughter. I showed her this drawing this morning, and she got very excited..."He looks like a piggy!" I said, "Yeah, he digs in the ground with his nose and eats ants!", which elicited a big "ANTS? EWWWW!" It was pretty great. 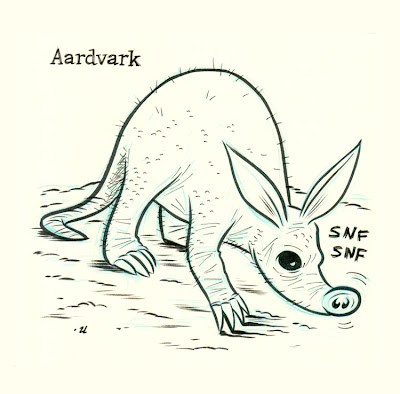 Posted by Robert Ullman at 9:53 AM

wait, i'm a bit lost. what are you guys doing with this project? looks fun! i'll be watching!

It's nice that Evie is interested in your work. I gave Frances a copy of the New Moon magazine in which I published a story that I wrote with her in mind. She has yet to let me read my story, but I have read the comic about getting your period to her approximately a million times.